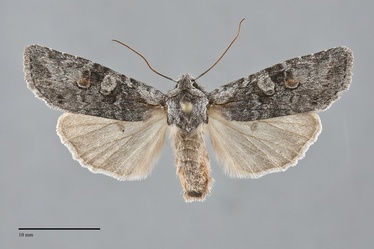 Lithophane pertorrida is a late fall and early spring-flying, medium-sized moth (FW length 18–21 mm) from east of the Cascade Mountains. It has an elongate, blue-gray forewing with whitish gray in the orbicular spot and red-brown in the reniform spot. They are bluish gray, slightly darker in the median area and whitish gray on the anterior base. A thin black basal dash is usually bordered anteriorly by yellow scales. The antemedial and postmedial lines are gray, double-filled with slightly lighter gray. The antemedial line is irregular, oriented perpendicular to the wing. The median line is very faint gray, evident as a dark part of the median area. The postmedial line is weakly scalloped, drawn sharply toward the base on the costa, is angled toward the base lateral to the reniform spot and more angled similarly from the lower end of the spot to the posterior margin. The pale gray subterminal line is faint, usually broken into indistinct spots, slightly irregular. It is preceded by a row of gray spots or black chevrons except near the costa. The terminal line is dark gray, a line or series of weak spots. The fringe is gray, weakly mottled. The orbicular spot is large, figure-eight shaped with the lower end a fused suborbicular post, outlined in black and filled with whitish gray anteriorly and the ground color at the lower end. The reniform spot moderately large, kidney-shaped, outlined in gray except black inferiorly, and is lined with the ground color peripherally and red-brown centrally. A small dark gray to black claviform spot is often present. The hindwing is light brownish gray with darker discal spot, postmedial line, and thin terminal line. The hindwing is lighter gray with a dark base. The head and thorax are gray with a lighter gray collar with a black transverse line across the upper third. The head and thorax appear sculpted with raised ridges and tufts. The abdomen has a reddish tint. The male antenna is weakly biserrate.

This species can be identified by its blue-gray color, pale-filled figure-eight-shaped orbicular spot, and red-brown reniform spot. It is most likely to be confused with Lithophane georgii, a widely distributed species with gray forewings and pale spots. The filling of its reniform spot is predominantly gray with at most a small amount of red-brown in the posterior third of the spot. It also lacks the warm color near the basal dash found in L. pertorrida. Dark forms of Lithophane baileyi can resemble this species, but are darker gray with a slight green or silvery tint. Its basal dash is black and white.

This species is common and widely distributed along the West Coast in moist forests.  In the Pacific Northwest, it is particularly common in mixed hardwood forests and coastal rainforests at low to middle elevations west of the Cascades.  It also occurs in mixed hardwood-conifer forests at higher elevations in the Cascades.  It appears to be more narrowly restricted to riparian habitats along creeks and rivers at middle elevations east of the Cascade and Coast Mountains.

Lithophane pertorrida is found west of the Cascades in Oregon, and in the interior of our region from central British Columbia through eastern Washington and Oregon. It is most commonly collected at low elevations in forests and is absent from dry open steppe habitats.

The range of this species extends south through California from the Northwest, reaching the border with Mexico.

This species is a foodplant generalist feeding on many kinds of hardwoods including Aceraceae, Betulaceae, Rosaceae, and Salicaceae.  Larvae may also be partly carnivorous, feeding on insects and other caterpillars.

Adults emerge in the fall and have been collected from early September to mid-October in our region. They reemerge to mate and lay eggs in the spring. Early season records span mid-March to late April. This species is nocturnal and comes to lights. It has also been collected at sugar bait in Washington.