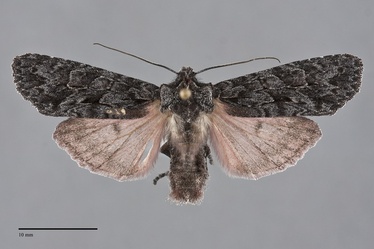 Lithophane ponderosa is one of three similar Northwestern Lithophane species with pine-bark-like forewings and pink hindwings. It is a medium-sized to large moth (FW length 17–21 mm) with fairly long forewings that have a slight notch anterior to the anal angle. They are strongly mottled blue-gray and dark gray. A thin black basal dash is present and the posterior base is similar to the hindwing in color. Many of the veins on the distal wing are dark gray. The basal, antemedial, and postmedial lines are dark gray to black, double filled with the blue-gray ground color, strongly zigzagged. The antemedial and postmedial lines are strongly toothed toward each other in the fold and are connected by an diffuse short dark gray to black bar. The postmedial line is toothed on the veins. A diffuse dark gray median line is present across the wing. The subterminal line is black, distinct across the wing, irregular with a weak W-mark on the mid-wing. The terminal line is a series of black wedges. The fringe is checkered blue-gray and dark gray. The orbicular and reniform spots are outlined in black outer and blue-gray inner lines. The orbicular spot is quadrate, filled with the blue-gray ground and black medially. The reniform spot is weakly hourglass-shaped, filled with slightly darker gray than the inner outline and black along the cubital vein which runs through the lower spot and continues black across the adjacent subterminal area. A discreet claviform spot is not evident. The hindwing is light pink-tan, vivid pink in fresh specimens and fading in spring specimens, with gray submarginal suffusion and dark gray discal spot, veins, and terminal line. The fringe is of the ground color or lighter whitish and often contains powdery gray scales. The head and thorax are blue-gray and charcoal gray; darkest on the top of the head, the base of the collar, and the lateral tegulae. They are strongly sculpted with ridges and tufts, adding to the bark-like appearance of the moth. The male antenna is weakly biserrate.

This species can be recognized as a member of the Lithophane lepida species-group by its bark-like mottled dark gray forewing and pink hindwings but resembles closely Lithophane atara, a fairly widespread species in our area, and Lithophane jeffreyi, a rarely collected species that is restricted to southwestern Oregon in the Pacific Northwest. Its forewing is slightly broader than that of L. atara and its subterminal line is better-defined near the costa. The hindwing discal spot of L. ponderosa is much larger and darker than that of L. atara which also lacks the gray submarginal suffusion that is present in L. ponderosa. Lithophane jeffreyi has a streakier forewing than L. ponderosa with a more contrasting light and dark gray pattern. Its orbicular spot is oval rather than square, and its hindwing is paler white with a slight coppery sheen without significant pink and is more powdery than that of L. ponderosa.

The larva is smooth, velvety green with a broad white or yellow sublateral line.  It is illustrated by Miller & Hammond (2003) under the name of Lithophane atara.

This species is common and widely distributed in western North American ponderosa pine forests. It is common to abundant in this habitat at middle elevations along the east slope of the Cascades and in the Blue Mountains.

The range of this species extends south from our area, reaching the Sierra Nevada of California and western Nevada in the west and Colorado in the Rocky Mountains.

This species is a foodplant specialist feeding on ponderosa pine (Pinus ponderosa) in the Pinaceae.  Larvae may also be partly carnivorous, feeding on insects and other caterpillars.

Adults emerge in the fall and fly briefly before hibernating. They emerge from hibernation in the spring to mate. Records from the Pacific Northwest are from late September to late October in the fall and late March until late May in the spring. This moth is nocturnal and comes to lights. It can also be collected at sugar bait.