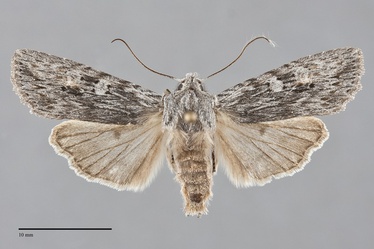 Lithophane contenta is a heavily streaked gray Lithophane that is found in association with oaks in late fall and early spring. It is a medium sized moth (FW length 16–18 mm) with elongate forewings. The ground color is gray, slightly darker basal to the median line and whitish gray at the base of the costa, with a heavily longitudinally streaked pattern of dark veins, deeply zig-zagged faint antemedial and postmedial lines, and long dark gray chevrons medial to the position of the subterminal line and between the veins at the terminal line. The gray median line is most evident at the costa. The orbicular and reniform spots are similar, gray with darker gray to black spots around the perimeter and filled with light whitish gray. The reniform spot contains warmer light ochre to reddish scales in a few specimens and the lower portion is filled with darker gray than the surrounding median area. The claviform spot is absent. The hindwing is slightly translucent light brownish gray, including the fringe, with darker gray discal spot, veins, and terminal line. The head and thorax are gray with a thin black line on the distal collar and a raised median tuft. The male antenna is bead-like.

This species is unlikely to be confused with other moths in most of its range. It might fly with Lithophane boogeri at the eastern end of the Columbia Gorge where Garry oak and western juniper occur together. This species is similar in having a streaky gray forewing, but it lacks the pale filled orbicular spot of L. contenta and has a thin median dash that L. contenta lacks.

Larva is dark green with a white lateral line and pink spots on the lateral line.  It is illustrated by Miller & Hammond (2003).

This species occurs in oak forests.  In the Pacific Northwest, it is common in oak savanna, oak woodlands, and in mixed hardwood forests with oaks at low elevations throughout western Oregon, extending eastward to dry oak woodlands along the east slope of the Cascades.  This species is considered to be management sensitive, depending on oaks as a larval foodplant.

Lithophane contenta is found in association with oaks in the western portion of the Pacific Northwest as far north as Vancouver Island, British Columbia. It is predominantly found west of the Cascades, but occurs in the Columbia Gorge and along the east slope of the Cascades as far north as Kittitas County, Washington.

The range of this species extends south into California from our region.

This species is a foodplant specialist feeding on oaks (Quercus spp.) in the Fagaceae, and primarily feeds on Oregon white oak (Q. garryana) in the Pacific Northwest.  It may be partly carnivorous, feeding on insects and other caterpillars.