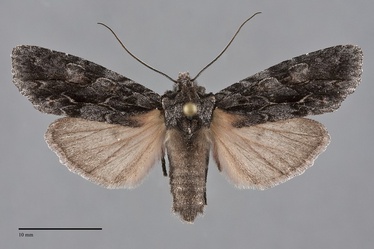 Lithophane atara is the smoothest and most narrow-winged of three similar pine-feeding Pacific Northwest Lithophane species. It is a medium-sized moth (FW length 19 mm) with dark gray bark-like forewing and coppery-pink hindwings. The forewings are appear long and have a slight notch anterior to the anal angle. They are strongly mottled dark gray, lightest medium gray in the basal area, along the posterior margin distal to the antemedial line, and near the costa distal to the postmedial line. A thin black basal dash is present and the posterior base is similar to the hindwing in color. The basal, antemedial, and postmedial lines are black, double filled with the medium-dark gray, strongly zigzagged on the posterior wing and poorly defined anteriorly. The antemedial and postmedial lines are strongly toothed toward each other in the fold where they are connected by a horizontal black anterior bar and gray line. A diffuse black median line is present across the wing. The subterminal line is black, indistinct, especially near the costa. The terminal line is a series of indistinct gray spots. The fringe is checkered medium and dark gray. The orbicular and reniform spots are outlined in black outer and light-gray inner lines, most distinct anteriorly. The orbicular spot is oval, filled with medium-dark gray. The reniform spot is quadrate, filled medium-dark gray and black along the cubital vein which runs through the lower spot. The claviform spot is absent. The hindwing and fringe are light coppery-pink with smooth gray marginal suffusion that continues into the fringe, dark gray discal spot and veins. The head and thorax are medium-dark gray with a black band across face and another across the distal thorax that continues into the lateral tegulae. The head and thorax are strongly sculpted with ridges and tufts, adding to the bark-like impression. The male antenna is weakly biserrate.

This species can be identified as a member of the pine-feeding Lithophane lepida species-group by the bark-like dark gray forewing and pinkish hindwing. It resembles closely Lithophane ponderosa and Lithophane jeffreyi, the other Northwest species in this species-group. It has a narrower forewing with less distinct subterminal and postmedial lines near the costa. Its hindwing has a smaller and weaker discal spot those of both of these species, and it lacks the powdery gray submarginal band that is present in both of them.

This species is narrowly confined to dry, open ponderosa pine forests at middle elevations.  It is usually rare and sporadic, but may be locally common.

Lithophane atara is found in pine forests in southeastern British Columbia and along the east slope of the Cascade Mountains in Oregon and Washington, extending to the Blue Mountains of northeastern Oregon.

The global range of this species extends east to Nebraska and south to Arizona and California.

This species is probably a foodplant specialist feeding on ponderosa pine (Pinus ponderosa) in the Pinaceae based upon the habitat and closely related species.  Larvae may also be partly carnivorous, feeding on insects and other caterpillars.

This species emerges in the fall and overwinters prior to mating. Based on a limited number of records it is most commonly collected in the fall. Our specimens are from late September and early October as well as late May. It is nocturnal and comes to lights. It has also been collected at bait made of fermenting fruit in eastern Washington.