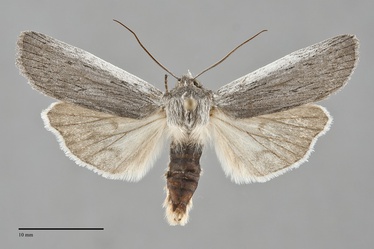 Lithophane fagina is a rarely collected, finely streaked, medium-sized to large moth (FW length 19–21 mm) that flies in British Columbia and eastern Washington during late fall and early spring. It has a long, narrow light gray forewing with a powdery white costa. It is streaky, even, medium gray with a very indistinct pattern of very strongly zigzagged thin dark lines, slightly darker where the postmedial line crosses the fold. The costa is pale whitish gray, fading to the ground color near the apex. The fringe is concolorous with the rest of the wing. No spots are evident. The hindwing is light yellowish gray with slight darker discal spot, postmedial line, and veins. The hindwing fringe is white. The head and thorax are medium gray with a sculpted appearance due to tufts and ridges. The male antenna is biserrate.

This moth can be recognized by its smooth light gray forewing with a whitish costa. It could potentially be confused with several other streaky gray Lithophane species, particularly L. contenta, L. boogeri, and L. itata, but all of these species are less smooth appearing and have a dark gray or black bar in the fold across the median area.

This species is widely distributed across Canada, extending to the northern Rocky Mountain region in moist forests and riparian habitats with birches.  It is rare and sporadic in the Pacific Northwest where it is found in boreal forest and near streams and rivers in foothills.

Lithophane fagina has been collected in central and southern British Columbia and in south-central Washington at the eastern end of the Columbia Gorge.

The distribution of this moth extends east from central Alberta to Nova Scotia and Pennsylvania in a narrow north-south band near the border between Canada and the United States.

This species appears to be a foodplant specialist feeding on birches (Betula spp.) in the Betulaceae.  Larvae may also be partly carnivorous, feeding on insects and other caterpillars.

This moth emerges in the fall and overwinters as an adult. It flies during warm nights in the spring. Limited records from our region are from late September and early March to mid-April. It is nocturnal and comes to lights.