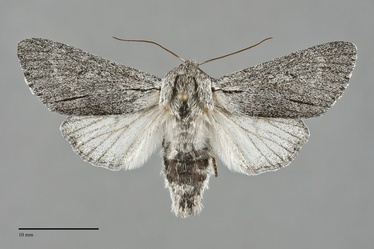 Acronicta cyanescens is a powdery blue-gray medium to large noctuid moth (FW length 17 - 23 mm) that flies in forests with Ceanothus during the early summer. It has black dashes at the forewing base and on the distal forewing. The forewing gets its ground color from a nearly even mixture of white and black scales. Thin, pointed, black dashes are prominent at the wing base and near the anal angle between veins CuA2 and 1A+2A, and there is often a small apical dash. Most specimens lack all transverse markings, but some specimens have a dark antemedial line and slightly scalloped two-toned postmedial line with pale medial and dark lateral components. The reniform spot is usually a gray smudge or oblique bar at the posterior cell, white the orbicular and claviform spots are absent. The fringe is blue-gray with black lines between the distal veins. The hindwing is white in males and pale gray in females with slightly darker veins, discal spots, and terminal lines. The hindwing fringe is white in males and pale gray in females. The head and thorax are uniform blue-gray. The male antenna is filiform.

This species can be identified by its uniform powdery blue-gray forewing color and limited markings consisting of fine black dashes. It was considered to be a subspecies of Acronicta lepusculina for many years but is much darker in color and lacks the oval orbicular spot of that species. It is most similar to the very rare species Acronicta lanceolaria, but A. lanceolaria is lighter gray and lacks the dashes found in A. cyanescens.

Larva is green, but is densely covered with extremely long white hair.  It is illustrated by Miller & Hammond (2003).

This species is widely distributed in dry forest habitats throughout much of the Pacific Northwest, particularly at middle elevations in the mountains.  However, it is uncommon to rare for unknown reasons.  This species is considered to be management sensitive, depending on disturbances that promote the growth of snowbrush.

Acronicta cyanescens is widely distributed in forests throughout our region but is most common east of the Cascade Mountain crest. It has been found rarely west of the Cascades.

This species is found in the Rocky Mountains at least as far south as Colorado, the Sierra Nevada of eastern California, and extreme southwestern Alberta outside of our region.

This species appears to be a foodplant specialist feeding on Ceanothus species in the Rhamnaceae, particularly snowbrush (C. velutinus).

Acronicta cyanescens has a fairly long flight season during the summer. The records from our region span May to August but are most numerous in late June and July. It is nocturnal and comes to lights.