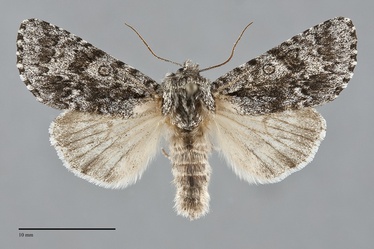 Acronicta impressa is a medium-sized (FW length 15 - 18 mm), dark gray moth that flies in forests throughout our region during most of the growing season. It has a postmedial line that is followed by a dark shade and has a square shape across the anterior and mid-forewing with long teeth toward the margin at the posterior aspect of the squared segment. The wing is slightly mottled medium-dark gray, darkest in the posterior median area and in the subterminal area abutting the postmedial line. The basal, antemedial, and postmedial lines are black, double and filled with slightly lighter gray than the ground color. The antemedial line is moderately irregular and oriented nearly straight across the wing. The postmedial line is dentate and is drawn sharply toward the base at the costa and then has a straight squared-off configuration with a straight transverse segment to vein CuA1. This portion has several large teeth on the veins, largest at the posterior end of the transverse segment. The line is then drawn toward the base and nearly touches the reniform spot before turning to meet the trailing margin at a right angle. The median line is diffuse and black and is usually similar in darkness to the postmedial area. The subterminal line is pale and inconspicuous. It is followed by black marks between the veins. The terminal line is a series of faint black dots between the veins. The fringe is checkered light gray and black. The orbicular and reniform spots are black and filled with the ground color. The orbicular spot is round with a black central ocellus. The reniform spot is moderately large but obscured by the median line which passes through it. The claviform spot is a dark smudge. The hindwing is pale gray, darker in females, with faintly darker discal spot, veins, and margin. The hindwing fringe is pale. The head and thorax are hoary median gray with dark margins on the tegulae. The male antenna is filiform.

This species could be mistaken for one of several Acronicta species, all of which are gray with a black and white pattern. The other species in our region lack the combination of dark shade distal to the postmedial line and ocellus in the orbicular spot.

Larva is black with red scoli or tubercles covered with tufts of yellow hair.  It is illustrated by Miller & Hammond (2003).

Acronicta impressa is widely distributed in forests throughout the Pacific Northwest. It is not found in dry steppe regions except in southern Idaho.

Acronicta impressa has a wide distribution in North America and occurs from coast to coast. It occurs across boreal Canada to the Quebec-Labrador border and New Brunswick. The range extends south in the mountains to the Carolinas. In the west it is found to central California along the Pacific Coast and New Mexico in the Rocky Mountains.

This species is a generalist feeding on a wide variety of hardwood trees and shrubs, including Betulaceae and Salicaceae, but appears to particularly prefer Rosaceae such as roses (Rosa spp.) and bitterbrush (Purshia tridentata) in the Pacific Northwest.

This species has a long flight season and might have two broods in our region. The phenogram shows peaks in late May and late July, tailing off at the end of August. It emerges early in the spring and has been collected in March and April. Acronicta impressa is nocturnal and comes to lights.