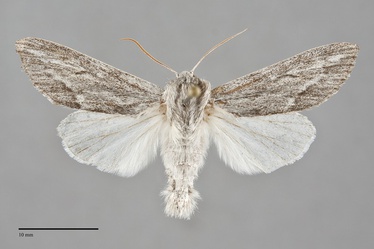 Acronicta lanceolaria is a very rarely collected, light gray, medium-sized moth (FW length 20 mm) that has been collected in the eastern part of the Pacific Northwest. It has a relatively long, apically pointed forewing and reduced pattern consisting of the light and dark postmedial line and a white hindwing. The forewing ground color is even powdery light to medium gray, usually with a pale streak through the cell to the apex. The pattern is nearly absent. Some specimens show the postmedial line from the cell to the trailing margin. When present this line is pale gray medially and dark gray laterally. The orbicular spot is a faint pale dot, and the reniform spot is pale or a dark and light chevron-shaped mark. The hindwing is pure white. The thorax is light gray. The male antenna is biserrate.

This rare species is most similar to Acronicta oblinita, a streaky species with pure white hindwings, but lacks the zig-zag postmedial line that this species has. It could potentially be confused with several species of Cucullia due to the long wing and gray color but lacks the fine longitudinal lines that all Cucullia species have on the distal wing near the margin. Most Cucullia species have a dark gray margin on the hindwing.

The habitat of this species is not known in the Pacific Northwest, but may include low elevation riparian habitats along creeks and rivers based on the larval foodplants. It is associated with sandy substrates in the East.

The range of this species extends to the East Coast from our region. It has been collected in Alberta. The range in the East is from Massachusetts to New Jersey west to Manitoba and Kansas.

This species is a general feeder on low shrubs. It feeds on willows (Salix spp., Salicaceae), Spiraea (Rosaceae), as well as several other species.

This species flies in late spring and again in the fall (in the East). The flight time is not well known in our area due to the small number of records. It is nocturnal and comes to lights.