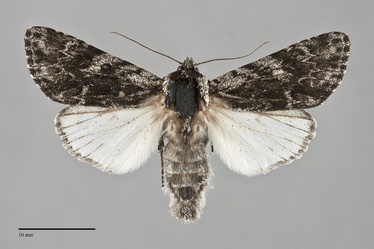 Acronicta perdita is the darkest Acronicta species in the Northwest. It is medium-sized (FW length 18 - 20 mm) with mottled dark gray and black forewings and hindwings that are white in males and gray in females. The wings have a slightly pointed apex and are powdery medium gray with extensive black suffusion. The wing is darkest across the lower half, especially in the fold, the subterminal area, and the terminal area opposite the cell and in the fold. Black extends to the costa at the antemedial and median lines, the latter extending through the reniform spot. The lines other than the postmedian line are obscure except as noted above. The postmedial line is double, black, and filled with the ground color or slightly lighter gray. It is strongly toothed on the veins. The fringe is lightly checkered with light gray and gray. The orbicular and reniform spots are black but inconspicuous against the dark wing. The orbicular spot is small, oval, and the reniform spot is a black smudge that blends with the median line. The male hindwing is pure white with dark gray veins, discal spot, and terminal line. The female has a dark gray hindwing with a checkered fringe. The head and thorax are grizzled gray with black stripes on each side of the head and on the edges of the tegulae. The male antenna is filiform.

Males of A. perdita are easily identified by the mottled black forewings and pure white hindwings. Females can be confused with Acronicta impressa but are larger, blacker, and have less distinct lines and spots than in this species.

Larva has orange scoli or tubercles covered with short hair tufts.  The color is black with a broad white lateral band.  It is illustrated by Miller & Hammond (2003).

This species is widely distributed in our region as far north as southern British Columbia. It is most common at mid-elevations in foothills surrounding the dry interior steppes. It is rare in western Washington but occurs in the Willamette Valley and Siskiyou Mountains of western Oregon. The range in Idaho includes the Panhandle, but it has not been collected further south.

This species is limited to California south of the Northwest. It occurs south to the Transverse Ranges north of Los Angeles.

This species feeds on shrubs such as bitterbrush (Purshia tridentata) in the Rosaceae and Ceanothus spp. in the Rhamnaceae in dry forest and shrub habitats.  However, Crumb (1956) has strangely reported willows (Salix spp.) in the Salicaceae as a larval foodplant.

Acronicta perdita has a long flight season from April to August in our area. Most specimens have been collected in May and June. It is nocturnal and comes to lights.