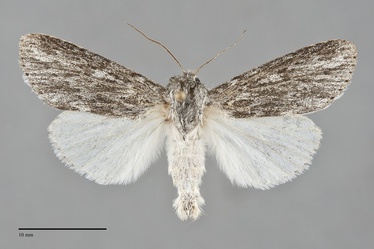 Acronicta oblinita is an uncommonly collected, medium-sized (FW length 16 - 18 mm), longitudinally streaked gray moth that flies in wet habitats in late spring and early summer. It has a pure white hindwing. The forewing is somewhat elongated, but the apex is not pointed. The color is medium dark gray and powdery due to a mixture of light and dark scales. It is slightly uneven, often with a dark area across the posterior median area below the fold. The wing appears streaked due to accentuation of the longitudinal elements of the pattern, including strongly zig-zagged antemedial and postmedial lines and dark gray on and between the veins on the distal wing. The medially-directed points of the postmedial line form a series of dark wedges in some specimens. The orbicular, reniform, and claviform spots are evident as dark gray smudged marks. The anterior and posterior portions of the orbicular and reniform spots are usually darkest and most easily identified. The terminal line is a series of dots between the veins. The hindwing is pure white. The head and thorax are uniform powdery medium gray. The male antenna is filiform.

This species is most similar to Acronicta lanceolaria, a very rarely collected species found in the eastern portion of the Pacific Northwest. It has a longer and more pointed forewing lacking most elements of a pattern. When visible its postmedial line is smooth unlike that of A. oblinita.

Larva is covered with short hair tufts.  The color is black with orange lateral spots.  It is illustrated by Covell (1984).

This species is most widespread in the East where it occurs from southern Canada to southern Florida, the Gulf Coast States, and east Texas. There are also multiple records of this species from central Alberta.

This species is best known for feeding on knotweed (Polygonum spp.) in the Polygonaceae, but is apparently a foodplant generalist that will feed on any vegetation found in marsh habitats.

Acronicta oblinita flies in late spring and early summer and is most commonly found in May and June in our region. It is nocturnal and comes to lights.