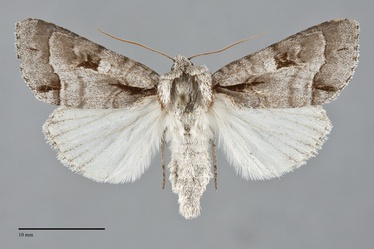 Acronicta quadrata is a rarely collected, medium-sized (FW length 18 mm), smooth warm gray noctuid that occurs in eastern British Columbia in our region. It has smooth lines and thick black basal and anal dashes and black in the cell between the spots. The ground color of the forewing is light gray with an odd reddish hue, while the costa and terminal wing are slightly darker gray. A thick basal dash extends distal to the antemedial line, a thick but short anal dash extends distally from the postmedial line without crossing it, a small and thin apical dash is present distal to the subterminal line, and the lower half of the cell is black between the two spots. The antemedial line is double but very faint, as is the median line. The postmedial line is double with a dark gray outer component and barely evident inner component, is filled with whitish gray, and is very smooth with a straight transverse segment lateral to the cell and a shallow concave portion below the level of the reniform spot. The subterminal line is pale, faint, and sinuous. The fringe is weakly checkered with light and medium gray. The orbicular spot is black, round, and filled with whitish gray without an ocellus. The reniform spot is arrowhead-shaped, partially outlined in black (greatest medially), and the claviform spot is absent. The hindwing is white with barely darker veins and a terminal line of minute gray dots between the veins. The head and thorax match the forewing, with brown on the lateral tegulae. The male antenna is bead-like.

This species can usually be recognized without difficulty by the combination of smooth warm gray color, black dashes and cell, smooth lines, and round orbicular spot. The only other species with a similar distribution of dashes and dark in the cell in our region, Acronicta hasta, is dark gray with a black oval orbicular spot.

This species is distributed across central Canada, extending to the northern Rocky Mountain region in shrub or woodland habitats.

Acronicta quadrata is limited to eastern British Columbia in the northwest. It has been collected near the Peace River in the northeastern part of the province as well as in the Rocky Mountain Trench in the southeast.

This species is found in a narrow north-south distribution across southern Canada and the Upper Midwest from British Columbia and Alberta to southern Quebec.

This species is a foodplant specialist feeding on cherries and plums (Prunus spp.) in the Rosaceae.

This species has been collected from late May until mid-July in the Northwest. It is nocturnal and comes to light.