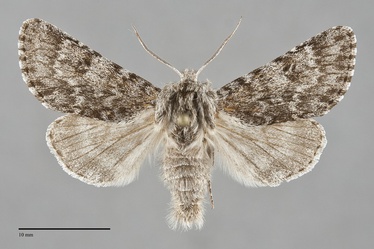 Acronicta lupini is a densely scales hoary dark gray medium-sized (FW length 16 - 19 mm) that flies at middle and high elevations during the summer. The forewing is covered with black and long white scales producing a grizzled or hoary look. The posterior wing is often slightly darker than the rest of the wing. The transverse lines are black, double, with lighter gray filling. The antemedial and postmedial lines are both irregular, with the latter distinctly toothed on the veins and evident as the lighter filling bordering the black outer component. The diffuse black median line is variable, faint to prominent across the wing. The pale subterminal line is followed by ill-defined black spots between the veins. The terminal line is a series of thin lines between the veins. The fringe is checkered with light and dark gray. The orbicular and reniform spots are black filled with the ground color. The orbicular spot is small and round to oval, and the reniform spot is chevron-shaped. The claviform spot is absent. The hindwing is light to medium-dark gray with diffuse gray postmedial and submarginal bands in some individuals and a faint discal spot. the hindwing fringe is pale gray, medium gray, or checkered pale and dark gray. The head and thorax are hoary medium gray, covered in long hair-like scales. The male antenna is moderately bipectinate.

This species can usually be identified by its dark gray color and hoary appearance in its high elevation environment. It is most similar to Acronicta impressa which can occur in montane forest but lacks the dark spot in the orbicular spot and dark shading distal to the postmedial line of that species. Acronicta lupini also has a darker hindwing than A. impressa.

Acronicta lupini is widespread in the mountains of the Pacific Northwest, including the Cascade Range, the Warner Mountains of southern Oregon, the Blue Mountains, and in the Rocky Mountains. It has been found at lower elevations in the Willamette Valley of western Oregon and more generally further north in central British Columbia. This species occurs at least as far north as southern Yukon Territory.

The range of this species extends south to Colorado in the Rocky Mountains, the Sierra Nevada in eastern California, Utah, and eastern Nevada. Acronicta lupini also occurs as far east as southern Labrador.

This species appears to be a generalist feeding on low herbaceous vegetation such as lupines (Lupinus spp.) in the Fabaceae.

Acronicta lupini has been collected from the spring through summer, generally earlier at lower elevations than at altitude. It is most commonly found during July and August in the mountains. Most specimens are collected at light during the night. Females also fly during the afternoon and are occasionally collected by hand net.