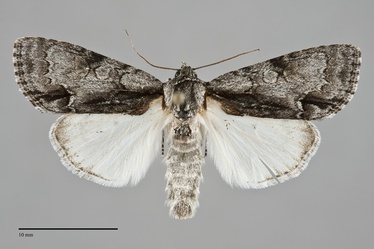 Acronicta mansueta is a relatively small (FW length 13–17 mm) Acronicta species with smooth medium gray forewings with blackish gray across the posterior wing near the trailing margin, a dark gray terminal area, and a white hindwing that lacks dark veins. The anterior wing is relatively square in shape. The gray color is smooth, with a blackish gray area from the costa to between the spots formed by the median line and a dark gray terminal area. The blackish area along the trailing margin of the wing encompasses black basal, median, and anal dashes and is offset from the margin near the anal angle by gray in the subterminal area. The antemedial line is black, double, filled with the ground color, and is focally drawn toward the base to meet the basal dash. The postmedial line is similar but filled with lighter gray than the ground. It is weakly scalloped and slightly convex in shape around the reniform spot and concave toward the base posterior to the spot. The median line is absent except near the anterior wing as described above. The subterminal line is similar light gray as the postmedial line filling, diffuse, and smoothly undulating near the outer margin. The terminal line is a series of broad black triangles between the veins. The fringe is weakly checkered gray and black. The orbicular spot is thin and black in outline, round in shape, and filled with light gray and a faint gray ocellus. The reniform spot is moderately large, kidney-shaped, with a black outline that is usually only complete on the medial side of the spot, and filled with the ground. The claviform spot is absent. The hindwing is white with a thin light gray marginal shade, wider in females than in males, and a thin gray terminal line. The fringe is light gray, slightly lighter than the marginal shade. The head and thorax match the forewing ground color, with faint dark barring across the collar and black lateral margins on the tegulae. The male antenna is filiform.

This species can only be confused with Acronicta funeralis, the only other species with a gray forewing and black trailing margin in our area. The black area on the trailing forewing forms a "tooth" toward the anterior margin at the antemedial line in A. funeralis that is lacking in A. mansueta and the white hindwing has dark veins near the margin that A. mansueta lacks. In addition, the orbicular spot is oval in funeralis and round in A. mansueta, and the terminal area is similar in darkness to the subterminal area, not darker gray as in A. mansueta. Until recently, A. mansueta was referred to as A. parallela.

Acronicta mansueta is found in the southern third of British Columbia east of the Cascade and Coast Ranges. It is common in Washington in the mountains bordering the Columbia Basin, but is absent from west-side forests. It also occurs in the Idaho Panhandle.

A. mansueta is found in most of the western United States and southwestern Canada.

Adults of A. mansueta have been found during much of the collecting season in our area. They appear in May and the season lasts until early September. This species is nocturnal and comes to lights.