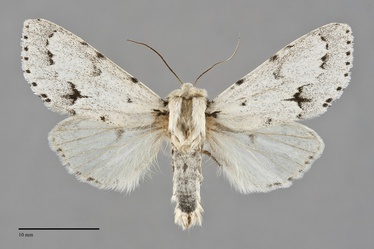 Acronicta vulpina is one of three whitish Acronicta species that occur in the Pacific Northwest. It is a medium to large noctuid moth (FW length 17 - 21 mm) that is often suffused with gray in our area, has short basal and anal dashes, a small black chevron on the mid wing at the antemedial line, and a dark gray mark near the anal angle. The ground color of the forewing is pure white, but gray suffusion is usually present and can be heavy in Northwest specimens. The wing is darkest in the fold next to the postmedial line and a short anal dash. A short basal dash is also present, sometimes complete to the antemedial line where there is a small black chevron-shaped mark pointing toward the wing base; this mark is present even when the basal dash is short. The basal, antemedial, and medial lines are evident as black marks on the costa. The postmedial line is pale with a black lateral component that is broken into a series of spots and lunules between the veins. It is drawn sharply toward the base at the costa, then nearly straight and parallel to the outer margin to the lower end of the cell where it turns toward the base before extending to the trailing margin at a right angle. The subterminal line is absent, but the terminal line is a series of black spots between the veins that continue to the inner row of the fringe. The rest of the fringe is white. The orbicular spot is variable, absent, a small black spot, or a small black oval filled with white. The reniform spot is a black chevron, often followed laterally by a dark smudge. The claviform spot is absent. The hindwing is pure white with a gray discal spot, light gray veins in females, and a terminal line of black dots. The head and thorax match the wing color, white to light gray. The male antenna is filiform.

This species is most easily mistaken for Acronicta innotata in our region. This species has a broader and more squared wing shape, is usually cream with a distinct yellow cast, and has a black spot at the wing base as the basal dash. Acronicta lepusculina is also similar in wing shape, color, and pattern but has a distincly longer basal dash that doesn't end in a black mark at the antemedial line.

This is a rare species of the northern Rocky Mountain region, extending to coastal rainforests and mixed hardwood-conifer forests at low elevations west of the Cascades.

Acronicta vulpina is most common in southern British Columbia in our region. It is also found in the Panhandle and southeastern part of Idaho, the Blue Mountains in southwestern Washington, and near the Columbia River Gorge in Washington and Oregon.

The range of this species extends east to Newfoundland in a relatively narrow band near the Canada-United States border. There are numerous records from central Alberta, and the range extends south to Colorado in the Rocky Mountains.

Forbes (1954) gives birches (Betulaceae) and poplar and willow (Populus and Salix, respectively in the Salicaceae) as food plants. Alders (Alnus spp. (Betulaceae)) are a possible food plant in western Washington and Oregon.

The adults are found from late spring to mid-August in our region. It is nocturnal and comes to light.