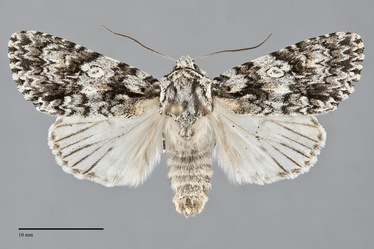 Acronicta marmorata is a mottled (perhaps marbled is a better descriptor given the species epithet) black and light gray medium-sized moth (FW length 17 - 20 mm) with a warm yellow patch at the wing base that occurs in association with oaks and flies during the entire summer. The ground color is slightly powdery light gray, with a mottled appearance due to charcoal gray and black in the antemedial line, median line, a shade distal to the postmedial line, and terminal area at the apex, opposite the cell, and near the anal angle. Thick basal, anal, and apical dashes are partially obscured by adjacent dark scales. The wing base has a light ochre yellow patch between the basal dash and the trailing margin that is evident in spread specimens. The basal, antemedial, and postmedial lines are black and double with equally prominent medial and lateral components. The antemedial line is irregular and oriented slightly obliquely to the long axis of the wing. The postmedial line is strongly dentate and is filled with whitish gray. The median line is black, irregular, and usually even across the wing. The subterminal line is pale gray, zig-zag in shape, and located close to the outer margin. Black triangles constituting the terminal line continue into the fringe to produce a strongly checkered pattern. The orbicular spot is oval, black, filled with white and a black central ocellus. The reniform spot is broadly kidney-shaped, black, filled with light gray peripherally and filled with diffuse dark gray centrally. The claviform is absent. The hindwing is slightly shiny white with dark gray veins on the outer half, a thin terminal line, and a weakly checkered white and gray fringe. The head and thorax are hoary light gray with transverse black lines across the frons, on the top of the head, and across the mid collar. The dark gray lines are present across the top of the collar and near the edges of the tegulae. The male antenna is filiform.

This species can be identified by its strongly mottled forewing with black dashes, oval white-filled and ocellate orbicular spot, yellow patch at the wing base, and pale hindwing with dark gray veins. It is unlikely to be found away from oak, the larval foodplant.

Larva is smooth with only a few scattered short hairs.  The color is reddish brown mottled with yellow.  It is illustrated by Miller & Hammond (2003).

This species is endemic to oak forests along the West Coast.  In the Pacific Northwest, it is common to abundant in oak woodlands and mixed hardwood forests with oaks at low elevations west of the Cascades, extending east to the oak woodlands along the east slope of the Cascades near the Columbia River.  This species is considered to be management sensitive, depending on oaks as a larval foodplant.

The range of this species is limited to California outside of our region. It has been commonly found from west of the Sierra Nevada crest to the Pacific Ocean, and south to the border with Mexico.

This species is a foodplant specialist feeding on deciduous oaks (Quercus spp.) in the Fagaceae.  In the Pacific Northwest, the primary larval foodplant is Oregon white oak (Q. garryana).

The flight period of this species spans April through August with a broad peak from late May through July. It is nocturnal and comes to lights.