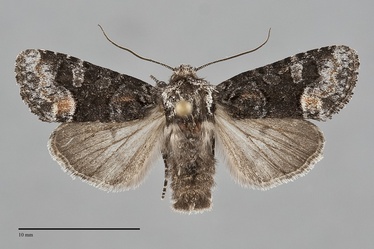 Lacinipolia davena is a common, small, dark, blackish-gray moth (FW length 11 - 14 mm) that flies in forests throughout most of the Pacific Northwest from late spring until fall. Its forewing has a mottled, blue-gray distal area with white and rusty red or tan near the anal angle, a pale reniform spot, and a dark, rusty tuft of scales on the posterior thorax. The median area is dark gray, nearly black. The wing base is slightly lighter gray, lightest in the basal area, and often with a light olive or red-brown streak in the fold. Much of the subterminal area and apex are mottled light blue-gray, with dark gray on the costa and a patch of brick-red, tan, or rarely light green in the posterior subterminal area that is bordered by white in the postmedial and subterminal lines. The terminal area is gray except at the apex. A short black basal dash is present, but often indistinct against the dark wing color. The veins in the subterminal and terminal areas can be black. Females are darker than males, especially on the wing base. Some specimens are diffusely darker smoky gray, dark olive, or tan. The basal, antemedial, and postmedial lines are dark gray and black, double, the latter two lines with strong components abutting the median area. The filling of the lines is gray, wide and white in the posterior half of the postmedial line. The basal line is irregular, evident anterior to the basal dash. The antemedial line is smoothly excurved with the apex of the arc near the posterior margin. The median line is black, indistinct, nearly straight. The postmedial line is sharply drawn toward the base on the costa, has a short straight lateral to the reniform spot, then smoothly arched from the spot to the posterior margin. The subterminal line is pale gray to white, uneven, palest, and widest near the anal angle abutting the colored area in the lower subterminal area. It is preceded by a thin patchy gray shade across most of the wing and often small gray to black spots at the posterior margin. The terminal line is a series of gray spots. The fringe is checkered gray. The spots are outlined in black. The orbicular spot is round or slightly ovoid, filled with gray and the ground color centrally, usually inconspicuous against the dark ground. The reniform spot is bar-like, weakly kidney-shaped, lined with white peripherally and pale to dark gray centrally. The claviform spot is small, indistinct against the dark median area. The hindwing is light gray, medium gray in females, slightly darker toward the margin, with dark veins and faint discal spot. The fringe is pale gray with a gray base. The head and base of the collar are smoky dark gray. The tip of the collar and central tegulae are hoary silver-gray, with dark gray edges on the tegulae. A distinctive rust-brown or chestnut-colored tuft is located on the posterior thorax. The eye is covered with tiny hairs. The male antenna is bead-like.

This species can be recognized by the combination of the rusty, brown tuft on the posterior thorax and the smoky, nearly black forewing with mottled, light gray distal to the median area and with a colored spot bordered medially by a white crescent formed by the filling of the postmedial line and laterally by the subterminal line. It is most difficult to distinguish from dark populations of Lacinipolia olivacea found west of the Cascades, especially females. In general, the dark color of L. davena is smoother, and the wing base is darker and smokier gray. Lacinipolia olivacea has an inconspicuous brown or gray tuft on the thorax, not rusty brown or rich chestnut-brown as in L. davena. Males of these species can be distinguished by the relative sizes of the cucullus of the valve, which is visible after brushing the scales from the ends of the abdomen. That of L. davena is small, barely wider than the width of the valve, while that of L. olivacea is broader, with a shape like an equilateral triangle. Lacinipolia comis is also dark gray and has a similar pattern of lines and spots. However, it has strong green and olive colors on the wing that are lacking in L. davena, and it usually has a black line or wedge at the outer margin above the anal angle that is gray or absent in L. davena. The cucullus of the valve is even larger in L. comis than in L. olivacea.

Lacinipolia davena is widespread in forests of the Northwest. It is especially common west of the Cascades from southwestern British Columbia to northern California. It extends inland across southern and central British Columbia, northern Washington, western Montana, and the Blue Mountains of eastern Oregon.

The range of L. davena is close to the Pacific Coast except in Canada where it ranges to the Rocky Mountains, including in southwestern Alberta. It is found throughout most of California south of the Northwest.

No information is presently available regarding larval foodplants of this species, but it is probably a climbing cutworm that feeds on various herbaceous plants based upon closely related species.

The flight period of L. davena is fairly long, extending from late May to the fall. It peaks in early summer, with most specimens from our area having June and July collection dates. It is nocturnal and comes to lights.