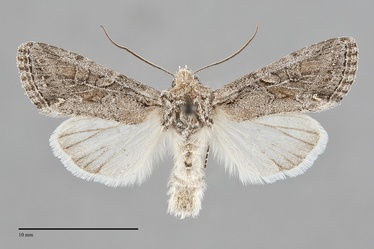 Lacinipolia pensilis is a common, small, light to dark gray moth (FW length 12 - 15 mm) that flies in a variety of habitats during the summer and fall. Its forewing has a variable pattern that usually includes all spots and lines, a red-brown flush on the median area, and a black and light yellow mark near the anal angle. The forewing is mottled medium-dark gray in populations from forests and light gray to tan-gray in those from steppes. The basal area is often lighter whitish-gray anterior to a short, black basal dash. Faint red-brown suffusion is often present in the median area, brightest in the fold and distal cell. The cubital vein and its proximal branches are pale gray in some specimens, and in others those in the subterminal area are black. The subterminal area is often paler than than the rest of the wing, especially opposite the cell with extension to the apical terminal area. The terminal area is mottled darker gray elsewhere, with a the darkest gray spot in the fold adjacent to a pale yellow segment of the subterminal line. The basal, antemedial, and postmedial lines are gray to black, partially double filled and with the ground color or slightly paler gray. These lines are most distinct in dark forest populations and are completely absent except for marks on the costa in some desert individuals. The basal line is curved, evident anterior to the basal dash. The antemedial line is faint, angled toward the outer margin and weakly excurved with apex at the base of the claviform spot when visible, usually most evident on the costa and at the fold. The median line is dark gray, angled from the costa to the medial reniform spot, and often absent further posteriorly. The postmedial line is weakly scalloped, faint from the costa to the inferior reniform spot which it usually touches, nearly straight across the wing lateral to the reniform spot, angled from the lower cell to below the spot, then turned perpendicular to the posterior margin with a tooth toward the base in the fold. The latter segment is often black with paler gray filling elsewhere. The subterminal line is pale gray, except pale yellow in the fold, moderately irregular. It is preceded by a dark gray shade or a series of black lines or wedges except on the costa, largest and darkest in the fold. The terminal line is dark gray, thin. The fringe is dark gray with a light, weakly checkered base. The orbicular and reniform spots are outlined in black and gray, darkest along the medial and lateral orbicular spot and the medial and inferior reniform spot. As with the lines, the spots are less prominent in steppe populations although the dark outlines often persist. The orbicular spot is ovoid, tilted toward the base anteriorly, filled with light gray peripherally, and the ground color to light gray centrally. The reniform spot has a weak or absent outline laterally and is kidney-shaped or weakly hourglass-shaped, with similar filling to the orbicular spot. The claviform spot is black, variable in size and prominence from nearly absent, small and blunt, to spanning the median area with a pointed tip. The hindwing is pale gray in males, white in desert populations, and light to medium gray in females, with a diffuse darker marginal area that is thinner in males and wider in females. The veins are gray, weakly so in desert populations. The discal spot is very faint, but a thin dark to light gray terminal line is present. The hindwing fringe is white with a light gray base in males, but white with a dark gray base in females. The head and thorax are hoary medium to dark gray with a black transverse line on the distal collar and dark edges on the tegulae. The eyes are covered with fine hairs. The male antenna is biserrate.

Although variable, this species can usually be recognized by the combination of gray forewing, basal dash, red-brown in the median area, and the black and light yellow mark near the anal angle that is typical of many Lacinipolia species. Some darker specimens from forests are closely similar to Lacinipolia vicina, a less common species that usually flies slightly earlier in the year. These species are difficult to separate without dissection. In general, L. pensilis is smaller than L. vicina, has a less pointed apex, and is more variable. The claviform spot of L. vicina is always long and pointed, reaching the postmedial line. That of L. pensilis can have this appearance but is often shorter or less pointed. Red-brown color in the median area is often extensive in L. pensilis, but restricted to near the claviform spot in L. vicina. The hindwing of L. pensilis is darker with a wider gray marginal band than in L. vicina, which has a pearly white hindwing with a narrow dark gray marginal band that appears to be clumped around the end of each vein. The juxta of the male genitalia (the sclerotized opening through which the aedeagus emerges) has a large number of curved spines in L. pensilis, while that of L. vicina is bordered by two large plates with long straight spines that point dorsad. These differences can sometimes be observed without dissection if the valves are separated before a specimen dries.

Lacinipolia lustralis, a species that occurs in British Columbia, is similar to dark forms of L. pensilis. Its pattern is usually indistinct than that of L. pensilis. Males are easily distinguished by the antenna, which is narrowly biserrate in L. pensilis and broadly bipectinate in L. lustralis. Lacinipolia anguina is slightly more widespread in our region and is found in the northern parts of Washington and Oregon, as well as in British Columbia. It has a larger reniform spot than L. pensilis that crosses the postmedial line into the subterminal area, and lacks reddish color in the median area. Lacinipolia longiclava is a pale gray and tan species that occurs in western Montana. It flies earlier in the year than L. pensilis, is paler with a light tan mark that extends to the apex of the forewing, and has pale areas in the fold basal and distal to the claviform spot that L. pensilis lacks.

This species is geographically variable in the Pacific Northwest, as described above. Populations from desert areas are much paler and less distinctively marked than those from forests. Extreme specimens from these areas appear to be different species, but intermediate forms exist in large series and no differences exist in the structure of the genitalia.

This species was described from the Northwest. The type locality of Dianthoecia pensilis Grote is [British Columbia], Victoria.

Lacinipolia pensilis is found in most of the Pacific Northwest east of the Cascade and Coast Mountains, including forests, mountains, and dry basins. It occurs west of the mountains, most extensively in Oregon. It is restricted to areas of decreased rainfall further north, particularly the rain shadow near the Gulf of Georgia in northwestern Washington and southwestern British Columbia.

This is predominantly a species of western North America. It occurs on the western Great Plains and the Rocky Mountains from southern Alberta to Colorado and New Mexico. The range extends to the Pacific Coast in California to the south of our region.

This species is a climbing cutworm that appears to be a very broad generalist feeding on many types of herbaceous vegetation, and also on many hardwood shrubs in the families Rosaceae, Grossulariaceae, Betulaceae, and Salicaceae.

The flight period of L. pensilis is relatively long, beginning in early June and lasting until October. It flies slightly earlier in forested habitats, usually peaking in late July and early August. It is a fall species in dry steppe, peaking in early September. It is nocturnal and comes to lights.