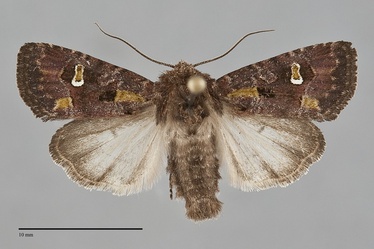 Lacinipolia renigera, the Bristly Cutworm, is a distinctive, small noctuid moth (FW length 11 - 13 mm) that flies in the eastern part of the Northwest during the summer. It has brown wings with patches of green scales and a green-filled, white-lined reniform spot. Both fore- and hindwings appear short and stubby. The forewings are slightly purplish brown, slightly lighter in the subterminal area and darker and slightly grayer in the terminal area. A black mark is present above the basal posterior margin. Olive green patches are present in the fold in the antemedial and subterminal areas. The lines are black, partially double filled with a light shade of the ground color and olive near the subterminal area. The antemedial line is slightly irregular, slanted toward the anal angle from the costa. The median line is dark gray, very faint or absent. The postmedial line is even, drawn toward the base on the costa, angled on vein M2, and angled slightly toward the base below the bend. The subterminal line is pale brown to olive, irregular, thickest at both ends. The terminal line is thin and pale. The fringe is gray-brown with weak checkering of the base. The round or oval orbicular spot is pale filled with the ground color, inconspicuous. The reniform spot is upright bow-tie or weak hourglass-shaped, black lined with pure white and filled centrally with olive. The claviform spot is black, usually filled with black. The hindwing is whitish gray with ill-defined gray on the margin, including the veins and a faint discal spot. The hindwing fringe is gray at the anterior margin and white elsewhere. The head and thorax are purple-brown. The eye surface is finely hairy. The male antenna is bead-like.

This species can be identified by the combination of dark brown forewing, olive-green patches in the fold, and white-rimmed reniform spot. It is unlikely to be confused with other moths in our region.

This species is widely distributed in open habitats and forests throughout most of North America. In eastern North America, it is sometimes a pest in agricultural crops.

Lacinipolia renigera has been found in eastern British Columbia and along the east slope of the Cascades in Washington in the Pacific Northwest.

This species is widely distributed in North America. It occurs as far north as Northwest Territories and Nova Scotia. The southern limits of its range are California, Arizona, Texas and Georgia.

This species is a climbing cutworm that feeds on many types of herbaceous plants.  During epidemic outbreaks, it will also feed on various hardwood shrubs.

Lacinipolia renigera is on the wing during summer and early fall in our region. The few records are from July to mid-September. It is nocturnal and comes to lights.

This species is sometimes a pest in various agricultural crops.  It mostly feeds on herbaceous crops, but during epidemic outbreaks, it may also feed on hardwood shrubs and trees such as apples.