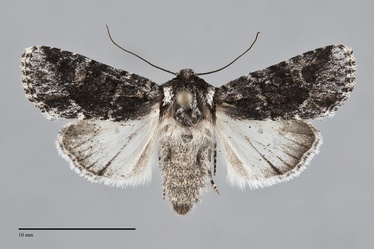 Lacinipolia quadrilineata is a small (FW length 11 - 13 mm), light gray and black species that flies in western Oregon in the spring and fall. It has rusty, brown accents in the cell and black, wedge-shaped marks near the anal angles of both the forewing and hindwing. The median area of males and the entire wing basal to the postmedial line in females is dark charcoal gray. Rusty red-brown is present in the cell, including in the reniform spot, and along the trailing margin in the median area in most specimens. Most of the base medial to the antemedial line in males and the areas distal to the postmedial line of both sexes are slightly bluish gray. The anterior subterminal area is charcoal, and a black line or wedge extends from the postmedial line to the outer margin in the fold. A thin, black, basal dash is present. A segments of the vein 1A+2A is dark near the antemedial line and several veins in the subterminal and terminal are dark gray. The basal and antemedial lines are dark gray and double, with gray filling. The antemedial line is smoothly excurved, oblique at the costa and nearly at a right angle to the posterior margin. The median line is dark, but obscure against the dark median area. The postmedial line is double with strong black inner and faint gray outer components, filled with gray anteriorly and white posteriorly, scalloped, drawn sharply toward the base on the costa, angled toward the base elsewhere, and slightly lateral to the reniform and more strongly elsewhere. The subterminal line is pale but faint, irregular, and occasionally evenly zigzagged, preceded by a gray or rusty shade. The terminal line is a series of dark gray spots. The fringe is strongly checkered light gray and charcoal. The orbicular spot is black, round, and filled with light to medium gray, rarely rust, with a punctate dark gray ocellus. The reniform spot is broadly kidney-shaped or weakly hourglass-shaped, outlined in black to dark gray and filled with pale gray or rust with darker gray to rust central filling. The claviform spot is black, ill-defined, often with a black shade continuing from the spot to the postmedial line in the fold. The hindwing is white with smoky gray near the margin that is widest at the anterior wing and forms a wedge near veins CuA2. A thin, dark, terminal line is present. The hindwing fringe is white with variable dark gray at the base and sometimes on the outer edge. The head and collar are dark gray with faint transverse lines across the collar. The tegulae are light gray with dark gray outer edges. The central thorax is dark gray, lightest centrally. The eyes are covered with fine hairs. The male antenna is weakly beaded.

This species is endemic to the West Coast in moderately dry grassland and forest habitats.  In the Pacific Northwest, it is common in open grasslands, oak savanna, oak woodlands, and mixed hardwood forests at low elevations west of the Cascades.  It is frequent, but sporadic in mixed hardwood-conifer forests at middle elevations in the Coast Range and along the west slope of the Cascades.

Lacinipolia quadrilineata flies in western Oregon in our region. Its northern limit appears to be the Columbia River.

The range of this species extends to Baja California through most of California. It is also found further east in Arizona and New Mexico.

This species is a climbing cutworm that feeds on various herbaceous plants such as the families Asteraceae and Fabaceae.

This species is double-brooded in the Northwest with a spring brood that peaks in late May and a fall brood that flies from August to early October. It is nocturnal and comes to lights.