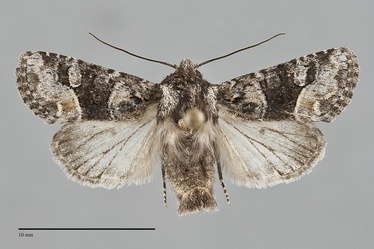 Lacinipolia olivacea is a widespread and geographically variable species that exhibits sexual dimorphism. It is small (FW length 11 - 13 mm) and varies in ground color from medium gray to nearly black, typically with arched, lightly filled antemedial and postmedial lines, and a lighter gray distal forewing with a red-brown patch in the subterminal space near the anal angle. The median area is dark gray, nearly black in populations from west of the Cascades. The forewing base, most of the subterminal area, and apex are light gray, sometimes with a slight bluish cast. The costal subterminal area and the remaining terminal area are medium-dark gray. A rosy pink, tan, or brick-red patch is present in the posterior subterminal area, and similar color is often present as weaker shading on the wing base. A short black basal dash is present. Some of the veins in the subterminal and terminal areas are dark in a few specimens. Females are darker than males, especially on the forewing base. The basal, antemedial, and postmedial lines are gray and black, double, the latter two lines with strong components abutting the median area. The filling of the lines is gray, wider and nearly white in the posterior half of the postmedial line. The basal line is irregular, which is evident anterior to the basal dash. The antemedial line is smoothly arced toward the outer margin with apex near the posterior margin. The median line is black and nearly straight. The postmedial line is sharply drawn toward the base on the costa, has a short straight segment that is slightly angled toward the base from just below the costa to the lower reniform spot which it touches, then smoothly arched from the spot to the posterior margin. The subterminal line is pale gray, uneven, palest and widest near the anal angle. It is preceded by a thin patchy gray shade across most of the wing and small gray to black spots in the fold. The terminal line is a series of gray spots. The fringe is checkered gray. The spots are outlined in black. The orbicular spot is round or slightly ovoid, filled with light to dark gray, often darker centrally. The reniform spot is bar-like, weakly kidney-shaped, lined with white and darker centrally, especially in western populations. The claviform spot is small, indistinct against the dark median color. The hindwing is pale whitish-gray, darker in females and slightly darker toward the margin, with dark veins and faint discal spot. The fringe is pale gray with a gray base. The head and thorax are dark gray with light margin on the collar and central tegulae and a brown tuft on the posterior thorax. The eye is covered with tiny hairs. The male antenna is bead-like.

This species is geographically variable across North America, including in the Northwest. Specimens from eastern North America are colorful, with green to olive and rosy tints on the forewing. Most western North American populations are gray, with relatively little warmer color. Those from west of the Cascade Range are very dark with crisp white markings in the lines and spots and brown or brick-red colors. This species appears to be replaced by the similarly marked by paler blue-gray species L. bucketti on the Oregon and northern California coast. It resembles populations of L. olivacea from further inland and could be a coastal subspecies of it.

The type locality of the synonym Mamestra petita Smith is [British Columbia], Vancouver.

This species is widely distributed in moist forest and grassland habitats throughout most of North America.  In the Pacific Northwest, it is common in coastal rainforests, mixed hardwood forests, moist grasslands, and urban areas at low elevations west of the Cascades.  It is relatively uncommon or rare in mixed hardwood-conifer forests and spruce-fir forests at middle to high elevations in the Cascades and Rocky Mountain regions.  However, it is common to abundant in open ponderosa pine forests at middle elevations east of the Cascades.  It also occurs in wet meadows of riparian habitats along creeks and rivers, and in disturbed agricultural and urban areas at low elevations east of the Cascades.

This species is widely distributed in forests throughout the Pacific Northwest. The known range encompasses northern British Columbia.

This is another widely distributed moth in North America. The range extends from Alaska to Newfoundland across the north. The southern limits of its range are southern California, Arizona, New Mexico, Missouri, and North Carolina.

This species is a climbing cutworm that feeds on many kinds of herbaceous vegetation such as the families Asteraceae and Fabaceae.

Lacinipolia olivacea is single-brooded and the adults fly during the summer. They have been collected from mid-June to September in the Pacific Northwest but are most common in July and August. They are nocturnal and come to lights.