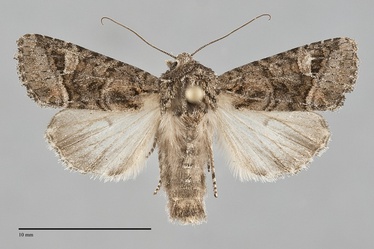 Lacinipolia rectilinea is a rarely collected, small moth (FW length 10 - 12 mm) that has been found in southwestern British Columbia, western Oregon, and the Columbia Basin during the summer. It has a slightly mottled, gray forewing with a nearly straight postmedial line with light ochre filling near a rusty to orange-brown spot in the posterior subterminal area. The forewing is mottled tan-gray with a slight to strong olive cast, grayer east of the mountains and greener west of the Cascade crest. The median area and costal subterminal area are slightly darker than the rest of the forewing, as is the mid-terminal area in some specimens. A small patch of rusty red or orange-red is present in the lower subterminal area adjacent to the light filling of the lower postmedial line. This is bordered by a darker gray spot in some individuals. A thin, black, basal dash is present, and a darker smudge is evident near the posterior margin in some specimens. The basal, antemedial, and postmedial lines are dark gray and filled with slightly lighter gray than the ground color, except for the posterior postmedial line, which contains light ochre yellow. The basal and antemedial lines are usually evident, but sometimes restricted to spots on the costa. The antemedial line is arched toward the outer margin with apex near the posterior margin. The median line is dark gray, diffuse, and angled at the reniform spot. The postmedial line is drawn toward the base on the costa, bent toward the base below the costa and then nearly straight to the posterior margin or weakly concave toward the base. The subterminal line is only evident as a transition between darker gray on the costa in the subterminal area and the lighter apex and vice-versa on the mid-forewing. The fringe is gray and slightly checkered. The forewing spots are outlined in black. The orbicular spot is round, filled with the ground and a dark ocellus. The claviform spot is similar without dark filling. The reniform spot is oval or weakly kidney-shaped, filled peripherally with light gray and centrally with the ground color. The hindwing is light whitish-gray with a darker margin and discal spot. The hindwing fringe is white with a gray base. The head and thorax are gray to olive-gray with slight, dark barring on the collar in a few individuals. The eye is covered with fine hairs. The male antenna is filiform.

This species can usually be recognized by its small size, even gray or greenish color with contrasting spot formed by the filling of the postmedial line, and reddish area in the lower subterminal area. It is most similar to Lacinipolia comis, which is usually darker charcoal-gray with contrasting, yellow-green to olive patches on the base and in the subterminal area, whereas in L. rectilinea, these patches are red. The males of these two species have a very large triangular cucullus at the end of the valve, larger than that of Lacinipolia olivacea and much larger than that of Lacinipolia davena.

This species was described from our area. The type locality of Mamestra rectilinea Smith is [British Columbia], Vancouver.

This species is rather uncommon and narrowly restricted to moist riparian habitats along creeks and rivers, disturbed agricultural areas, and even urban areas at low elevations in the Columbia Basin east of the Cascades.

Lacinipolia rectilinea is found in southwestern British Columbia, the Willamette Valley of western Oregon, and in the Columbia Basin.

This species is recorded from western California as far south as the vicinity of San Luis Obispo County on the Moth Photographers Group web site.

No information is presently available regarding larval foodplants of this species, but it is probably a climbing cutworm that feeds on various herbaceous vegetation like closely related species.

The flight period of L. rectilinea is summer. Most specimens have been collected in late July and early August.