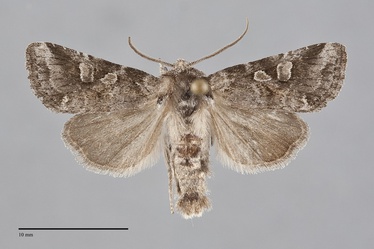 Lacinipolia lustralis is small (FW length 12 - 14 mm) moth that flies in eastern and central British Columbia during the summer. It has a smooth, gray forewing with light-rimmed orbicular and reniform spots. The forewing is slightly uneven light to medium lead gray, darkest along the costa and in the terminal area opposite the cell and in the fold. Some specimens have dark veins on the distal wing. A red-brown to orange-brown flush is present in the median area, strongest in the fold and cell. The basal, antemedial, and postmedial lines are faint gray, double with pale gray filling. The basal and antemedial lines are very faint, often absent below the costa. When present, the antemedial line forms a dark and pale curve at the base of the claviform spot. The median line is smoky gray, darkest from the costa through the cell and only occasionally present further posteriorly. The postmedial line is usually evident across the forewing, indistinct to well-defined and scalloped, drawn toward the base on the costa, bent toward the base near M2, and nearly straight from the bend to the posterior margin. The subterminal line is pale gray to slightly yellow, wide and sinuous, forming a small yellow spot adjacent to a similar size gray spot in the terminal area at the posterior margin. The terminal line is a series of gray lines between the veins. The fringe is dark gray. The orbicular and reniform spots are dark gray lined peripherally with light gray and filled with the ground color. The orbicular spot is oval or teardrop-shaped. The reniform spot is kidney-shaped. The claviform spot is black, strongest anteriorly or absent. The hindwing is gray with darker discal spot, postmedial line, and veins. The hindwing fringe is white with a ochre and gray base. The head and thorax are brown-gray with slightly lighter gray edges on the collar and tegulae. The eye is covered in fine hairs. The male antenna is bipectinate.

This species flies in grasslands in the northern Great Plains. The habitat in the Pacific Northwest is unknown.

Lacinipolia lustralis is restricted to British Columbia in our region. It has been recorded from the central Province, but it is likely to also occur near the eastern border.

The range of L. lustralis extends east to the island of Newfoundland and south to Arizona, Colorado, and Virginia.

No information is presently available regarding larval foodplants of this species, but it is probably a climbing cutworm that feeds on various kinds of herbaceous vegetation like closely related species.

This species is single-brooded and the adults fly in June and July. It is nocturnal and comes to lights.