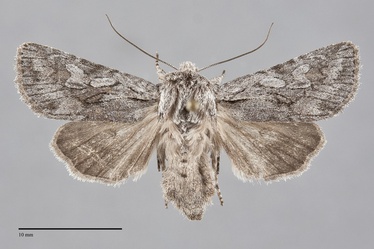 Lacinipolia patalis is a small, light gray moth (FW length 13–14 mm) that flies west of the Cascade crest in spring and early summer. Its forewing has fused orbicular and reniform spots and a thin, black and white basal dash. The forewing apex is slightly pointed and the margin is weakly scalloped in some specimens. It is light to medium-dark gray, usually slightly darker in the median area, the costal subterminal area, and the terminal area opposite the cell and in the fold. A dark mark usually consisting of two black subterminal spots and a diffuse, blackish-gray terminal shade is located above the anal angle. The veins distal to the postmedial line are thin and dark. The basal, antemedial, and postmedial lines are dark gray, double on the costa and simple elsewhere. The basal and antemedial lines are often absent except for spots on the costa. When evident, the antemedial line is angled from the costa toward the outer margin and convex with apex on the posterior third and toothed inward on the veins. The median line is gray, diffuse, and strongly angled on the costa. The postmedial line is also variable, usually moderately toothed but sometimes just a vague line without scalloping or absent except on the costa, sharply drawn toward the base on the costa, nearly straight lateral to the reniform spot, sharply bent to touch the lower reniform spot, and drawn to near the antemedial line from the fold to the posterior margin. The subterminal line is a diffuse gray shade variably preceeded by a series of indistinct black wedges in the subterminal area that are strongest in the fold and usually also present across the mid-forewing. The terminal line is a series of small gray spots between the veins. The fringe is similar to the terminal area, often slightly darker gray. The spots are outlined with black and filled with the ground color or a slightly lighter gray. The orbicular spot is a slightly irregular elongate oval, usually fused to the posteror reniform spot. The reniform spot is strongly kidney-shaped, fused to the orbicular spot or with short spike-like extension toward to the base from the posteromedial side. The claviform spot is sharply defined or smudged, extending to the postmedial line. The hindwing is pale tan-gray with suffusion of darker gray toward the lateral margin, dark veins, discal spot, and uneven thin terminal line. The hindwing fringe is pale gray with a darker base. The head and thorax are gray with a thin, black transverse line across the distal collar and black lateral edges on the tegulae. The thorax is sculpted with a slight median crest and broad tegulae. The eye is covered with fine hairs. The male antenna is bead-like.

Lacinipolia patalis is restricted to the western part of the Northwest as far north as southwestern British Columbia. It has not been collected east of the Cascade Mountains.

The distribution of L. patalis is near the Pacific Coast. The range extends south to near the border with Mexico through coastal California. It also occurs in the northern Sierra Nevada.

This species is a foodplant specialist feeding on woody Rosaceae, particularly species of Rubus and Rosa.

This species appears in late spring and flies into the early summer. Records from the Pacific Northwest span early May to early July, with a peak in early June. It is nocturnal and comes to lights.