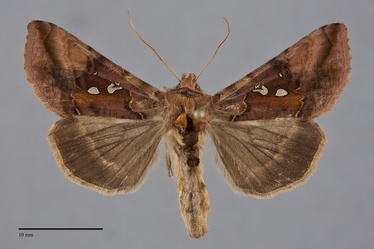 Autographa bimaculata is a warm tan to rusty-brown medium-sized moth (FW length 18–19 mm) that flies in British Columbia during the summer. It has a gold stigma comprised of two spots on the mid-forewing. The forewing has a slightly pointed apex and a slight flange at the anal angle. It is slightly mottled dark reddish-tan to warm orange-brown, with velvety darker brown on the median area below the cell. A darker gray streak extends through the subterminal area and extends to the apex through the anterior terminal area. The mid-distal forewing area has an oily sheen. The shiny gold stigma is divided into a basal thick "V" or check mark and a lateral oval dot. A black spot is present at the base of the wing. The basal line and the portions of the antemedial and postmedial lines posterior to the cubital vein are thin and gold. These lines and the median line form a series of similar gray-brown spots on the costa. The antemedial line is undulating, strongly oblique from the medial stigma toward the forewing base. The postmedial line is wavy, nearly transverse in orientation with a turn toward the base at the posterior margin. The subterminal line is evident as the transition from dark subterminal area to the lighter terminal area. It is undulating with a shallow "W" mark on both sides of vein CuA1. The fringe is the same color as the terminal area without a terminal line. Portions of the posterior orbicular and reniform spots are outlined in very thin gold. A black spot is located at the anterior distal cell in most specimens. The rest of the reniform spot is thin, dark, filled with the ground color. The hindwing is reddish gray-brown with gray suffusion medial to the postmedial line which is separated from the gray marginal band by a thin are that lacks suffusion. The veins are darker gray. The hindwing fringe is light pinkish gray. The head, collar, and long thoracic tufts are orange-brown, with the lateral thorax grayer brown. Additional strong dorsal tufts are present on several of the abdominal segments. The male antenna is filiform.

This species can be identified by its red-brown color and bipartite gold stigma. Other brown species in the subfamily Plusiinae have a thin hairpin-shaped or thick single stigma. The only exception is the introduced Chrysodeixis eriosoma, which only occurs in greenhouses in the lower mainland of British Columbia and may have been eradicated. Portion of its wing are gray-brown, with patches of red-brown in the median area. Males of this species have long tufts of scales on the lateral and distal abdomen that are absent in A. bimaculata

This species is widely distributed across much of Canada in moist meadow or open forest habitats, extending southward into the Rocky Mountain region.

Autographa bimaculata is found in British Columbia in the Northwest. It has been collected a few times in the southern third of the province, but occurs west to near the Alaska Panhandle.

This is a boreal zone species that occurs across Canada and the adjacent upper Midwest and New England States. The range extends south to New Mexico in the Rocky Mountains.

This species flies during the summer, usually in July and August. It is nocturnal and comes to lights.