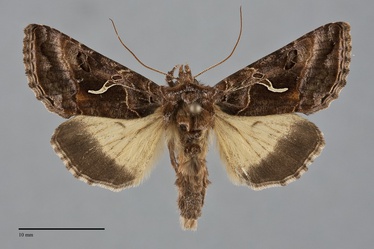 Autographa sansoni is a distinctive medium-sized moth (FW length 16 - 18 mm) that flies in montane forests from late spring to August. It has a dark brown forewing with a curved silver stigma and a light-yellow hindwing with a dark marginal band. The wing has a slightly pointed apex and a slight flange at the anal angle. The color is dark smoothly mottled gray-brown, darker at the base of the trailing margin and in the distal subterminal and terminal area. The anterior median area distal to the reniform spot and the adjacent subterminal area are grayer. The median area posterior to the cubital vein is velvety dark brown with a rust-brown patch between the posterior tip of the stigma and the postmedial line. A patch with an oily green sheen is present in the fold on the outer wing, mostly in the subterminal area. The stigma is silver-white, curved, with the medial limbs separated for about a third of the length of the entire mark and the lateral portion even in width with a rounded tip. The basal line is a dark brown double line. The antemedial line is dark at the costa, interrupted through the cell, and brown and tan below the cell where it is strongly curved toward the lower base. The postmedial line is brown, double filled with gray-brown on the anterior wing and darker tan toward the posterior margin. It is curved toward the base on the costa, straight at an oblique angle to the wing from below the costa to the fold where it is offset towards the outer margin. The subterminal line is dark, irregular with a W-mark on both sides of vein CuA1. The terminal line is pale with a series of dark brown spots between the veins. The fringe is gray brown checkered with dark brown. The orbicular and reniform spots are thin and pale. The orbicular spot is small and trapezoidal. The reniform spot is hourglass-shaped with dark brown in the lower portion and along the lateral wall. The lower portion is silvery in some specimens. The hindwing is pale yellow with a thin gray discal spot, a wide brown-gray marginal band with an indistinct inner margin. The hindwing fringe is light gray with a yellow and gray base and gray median checkering. The head and thorax are dark brown lighter and warmer colored head and collar. Loose tufts of scales are present on the posterior median thorax, with additional tufts on several abdominal segments. The male antenna is filiform.

This species is widely distributed and moderately common at high elevations in subalpine forests of the Rocky Mountains and Cascades, extending southward into the Siskiyou Mountains.  However, the species is also locally common in open habitats of the coastal rainforest at low elevations in the Coast Range.

Autographa sansoni is widespread in the mountains of the western and northern parts of the Northwest. It occurs throughout the Cascades, in the Rocky Mountains at least as far south as the Idaho Panhandle, and in the across southern British Columbia. The northern limit is in northeastern British Columbia. It has been collected in the Coast Range in Clatsop County, Oregon.

This is a western North American species that is confined to the Rocky Mountains outside of the Northwest. Records extend from Alberta south to New Mexico.

No information is presently available regarding larval foodplants for this species, but it probably feeds on various herbaceous plants like closely related species.

This species flies from late spring through summer. Records from the Pacific Northwest extends from May to August. It is nocturnal and comes to lights.