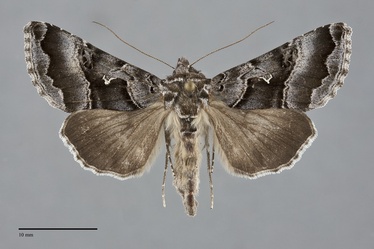 Autographa v-alba a medium-sized (FW length 18 - 20 mm) gray and black moth that flies in montane forests east of the Cascade and Coast Ranges during the summer. It has a smooth black median area beneath a silver-white stigma. The forewing has a slightly pointed apex and a weak flange at the anal angle. The ground color is smoothly mottled gray, slightly darker along the costa, especially near the basal line and at the diffuse median line. The median area posterior to the cubital vein is blackish gray, darkest black near the stigma and the adjoining lines. Dark gray shading in the subterminal area gradually darkens to black at the subterminal line. The stigma is silver-white, thin and irregular V- or sideways fishhook-shaped. The lines are dark gray, double with pale gray filling. Two small black spots are associated with the basal line, one on each side of the cubital vein. The antemedial line is oblique across the costa near the orbicular spot, is strongly offset toward the base across the cell, then strongly oblique and slightly incurved toward the base below the cell. The postmedial line is drawn toward the base on the costa, then slightly irregular and weakly concave toward the base across the wing with a slight bend above the fold. The subterminal line is pale, very thin, irregular with a prominent W-mark centered on vein CuA1. The terminal line is thin, black. The fringe is white with dark gray checkering. The orbicular and reniform spot are thin, pale gray. The orbicular spot is a small tilted oval filled with the ground color. The reniform spot is hourglass-shaped, touches the postmedial line, and is partially outlined in black on the inside and outside. The hindwing is brownish gray, darker gray toward the outer margin, with a gray postmedial line, discal spot. and terminal line. The hindwing fringe has a white edge and checkered yellow and gray base. The head and thorax are hoary dark gray with lighter gray edges to the collar, tegulae, and loose tufts on the posterior thorax. Additional dark gray dorsal tufts are present on several of the abdominal segments. The male antenna is filiform.

This species can usually be readily identified by its gray and black forewing with a silver stigma. The most similar species is Autographa speciosa which occurs slightly to the west of the range of A. v-alba west of the Cascade crest. It tends to be slightly more brown-black in color. Its stigma has a round or oval lateral extension, sometimes a separate spot, that is lacking in A. v-alba.

This species is found in the mountains of western North America where it flies in subalpine forests.  It is usually uncommon to moderately common on dry ridges at higher elevations, but is rare in mixed hardwood-conifer forests and in open ponderosa pine forests at middle elevations.

Autographa v-alba is found from the southern third of British Columbia south through the Cascade Mountains to southern Washington and in the Rocky Mountain ranges at least as far south as the Idaho Panhandle and the Blue Mountains of northeastern Oregon.

The northern range of this species includes Alberta. The range extends south through the Rocky Mountains of Montana and Wyoming to central Utah.

No information is presently available regarding larval foodplants for this species, but it probably feeds on herbaceous plants like related species.

The flight period of A. v-alba is summer, usually July. It is nocturnal and comes to lights.