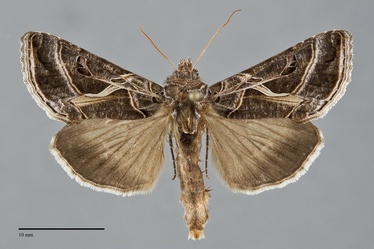 Autographa flagellum is a distinctive medium-sized moth (FW length 17 - 19 mm) that flies in eastern British Columbia during the summer. It has a long, thread-like, silver stigma on its mottled brown-gray forewing. The forewings have a slightly pointed apex, a small flange at the anal angle, and a weakly scalloped margin on the anterior half. The ground color is dark gray brown with a slight violet tint, finely speckled with short transverse marks. The cubital vein is pale. A dull yellow-tan streak extends across the median area below the stigma. The medial subterminal area and posterior terminal area are light violet-gray, with the lightest shade abutting the postmedial line. Dark blackish-gray is present as a smooth shade in the lateral subterminal area abutting the subterminal line, mottling in the anterior two-thirds of the terminal area, and in a small spot near the anal angle. The silver-white stigma is large, spanning the median area, curved with long basal limbs and a thin lateral portion. The forewing lines are brown-gray, double with pale yellow-gray filling. Small black spots are associated with the basal line. The antemedial line is angled with the apex lateral on the radial vein, offset lateral at the cubital vein, and strongly oblique and incurved toward the base below this vein. The postmedial line is drawn sharply toward the base on the costa, then smoothly excurved to the tip of the stigma where it zigzags around the end of the yellow streak. The subterminal line is evident as the transition from the dark lateral subterminal area and the lighter terminal area, bent to nearly touch the outer margin below the apex and forming a "W" mark near vein CuA1, then obsolete further posteriorly The terminal line is even pale rose-gray medially and black laterally. The fringe is pale violet-gray with several longitudinal gray stripes. The hindwing is gray-brown with gray veins, poorly defined marginal band, and a weak postmedial line. The hindwing fringe has a yellow and gray base and a white edge. The head and thorax are dark gray-brown with light gray tips on the collar, tegulae, and long posterior thoracic tufts. Additional dorsal tufts are present on several abdominal segments. The male antenna is filiform.

This species is unmistakable. The forewing pattern has several unique features that include the long silver stigma, the dull yellow streak across the median area, and zigzag bends in the postmedial line.

This species is widely distributed across Canada in moist meadows and open forest habitats.  It appears to be narrowly restricted to cool, boreal forest and meadow habitats.

Autographa flagellum has only been encountered in southeastern British Columbia in the Northwest.

This species occurs in the boreal zone in a relatively narrow north-south distribution near the Canada-United States border from British Columbia to Newfoundland. The southern limits in the East are Pennsylvania and Michigan. A seemingly isolated is shown in Colorado in Lafontaine and Poole (1991).

This species appears to be a generalist feeding on many kinds of herbaceous vegetation, and is specifically known to feed on Helianthus spp. and Liatris spp. (Asteraceae) (Eichlin & Cunningham, 1978).

Adults fly between June and August.