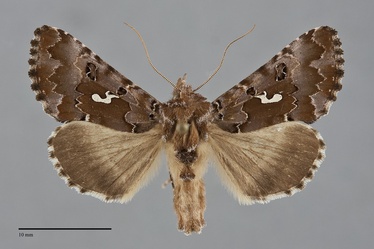 Autographa corusca is a beautiful, rich violet-brown and brown, medium-sized moth (FW length 16 - 18 mm) that flies west of the Cascade Mountains during the summer. It has an ornate silver stigma in the middle of the forewing. The forewing has a weak flange at the anal margin. The color is mottled violet-brown, rarely more pink than violet, and more uniform velvety olive-brown on the median area below the cubital vein and preceding the subterminal line. The silver-white stigma is divided into basal and lateral parts that are united or separate. The basal portion is a thick spot with two curved spurs, one directed anteromedially and the other anteriorly. The lateral part is oval or teardrop-shaped. The basal, antemedial, and postmedial lines are mostly thin silver surrounded by thin black spots, off-white and dark gray near the costa where they and the median line form a series of dark spots. The basal line is most prominent on the anterior wing. The antemedial and postmedial lines are transversely oriented and irregular with teeth and curved segments between the veins. The subterminal line is jagged, pale but mostly evident as a transition between the darker lateral subterminal area and the lighter terminal area, with a single tooth toward the margin below the apex and a W-mark near vein CuA1. The terminal line is a series of small pale spots near the margin. The fringe is checkered off-white and dark gray. The orbicular and reniform spots are thin and pale surrounded by patchy black inside and outside the lines and filling of the ground color. The reniform spot is small and nearly round. The reniform spot is hourglass-shaped. The hindwing is pale gray-tan with slightly darker gray veins, broad ill-defined marginal band, and terminal line. The hindwing fringe is white with dark gray checkering. The thorax is similar to the forewing ground color but slightly more reddish. Gray edges are present on the collar, tegulae, and tips of long tufts on the posterior thorax. Additional strong tufts are present on several abdominal segments. The male antenna is filiform.

This species can be identified by its mottled violet-brown and olive-brown forewing with a large stigma and silver lines. It is unlikely to be confused with other species.

Larvae are green with three pairs of white lines on the back and a pale-yellow lateral line.

This species is narrowly endemic to coastal rainforests at low to middle elevations west of the Cascades, including the Coast Range and along the west slope of the Cascades.  It is moderately common in this habitat.

Autographa corusca occurs west of the Cascades and Coast Ranges from the Alaska Panhandle to southern Oregon. The range extends slightly further east in British Columbia and in the Columbia Gorge. A record from the Columbia Basin in Washington is odd and is most likely spurious.

This species has a limited range outside of the Northwest, occurring only in the Alaska Panhandle and in northern California.

This species appears to be a foodplant specialist feeding on alders (Alnus spp.) (Crumb, 1956) in the Betulaceae, and may feed primarily on red alder (A. rubra) in coastal rainforests.

Adults fly from late May in southern Oregon to September in British Columbia, apparently in a single generation.