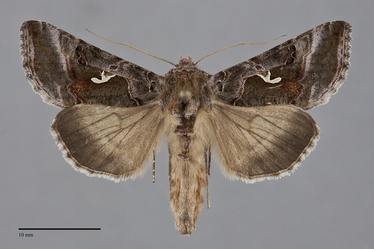 Autographa pseudogamma is a fairly large member of the subfamily Plusiinae (FW length 17 - 20 mm) that flies in subalpine forests throughout our region during the summer. It has a mottled light purplish gray, dark brown, and rusty forewing with a silver-white stigma and a green sheen. The forewing has a pointed apex, slightly scalloped outer margin, and a flange at the anal angle. The ground color is purplish gray mottled with brown, lightest on both sides of the anterior postmedial line, in the posterior terminal area, and one the fringe. The anterior median area, the entire distal postmedial area, and the anterior two-thirds of the terminal area are blackish gray. The median area posterior to the cubital vein is dark gray-brown with a slight olive tint and a rust-brown to brassy ochre patch in the fold near the tip of the stigma. A brassy to greenish sheen is present on the distal wing, greatest in the subterminal area in the fold. The stigma is silver-white, comprised of a thin V-shaped medial part and a teardrop or comma-shaped lateral portion that are only rarely separated. The basal line is brown, double with black spots on each side of the cubital vein. The antemedial line is dark brown, double with tan filling, faint on the costa, interrupted through the cell, and smoothly curved toward the posterior base below the cell. The postmedial line is dark brown with yellowish tan filling, sharply drawn toward the base on the costa, slightly irregular and strongly obliqued toward the base near the reniform spot, and zigzag at the rusty or yellow patch in the fold. The subterminal line is moderately irregular with a W-mark surrounding vein CuA1. The terminal line is violet with dark lines between the veins. The fringe is checkered violet gray and dark gray. The orbicular and reniform spots are thin, pale. The orbicular spot is small, curved toward the base anteriorly. The reniform spot is hourglass-shaped, tilted toward the apex anteriorly, with black-brown along the lateral wall and base. The hindwing is gray-brown with darker gray toward the outer margin, faint discal spot and postmedial line, and a thin terminal line. The hindwing fringe is white with a yellow and gray base and gray mesial checkering. The head and most of the collar are tan, with brown and gray transverse lines on the distal collar. The central thorax is rusty gray-brown with tufts of loose scales. Additional tufts are present on several abdominal segments. The male antenna is filiform.

This species can usually be told from other high-elevation moths by its violet-gray and dark brown forewing with a silvery stigma. It is most likely to be confused with Autographa californica, which is often collected at high elevations. A. californica, a common and widespread species, is grayer with a less even brown median area. It also has a black line across the distal subterminal area that is lacking in A. pseudogamma. Autographa buraetica, a species that is limited to far northern British Columbia, is also similar to A. pseudogamma. It is smaller (FW length 14 - 16 mm), has a browner forewing that lacks the pale spot near the zigzag portion of the postmedial line that is prominent in A. pseudogamma, and has a dark median line below the stigma that A. pseudogamma lacks.

This species occurs in montane mixed hardwood and conifer forests, especially near timberline.  It is usually uncommon or rare, but may be locally common in the high elevation habitats.

Autographa pseudogamma is found in most high elevation mountain ranges in our region, including in the Basin and Range Ecoregions.

This species is widespread in boreal and montane portions of North America. It occurs from Alaska, western Yukon, and British Columbia east to Labrador and Newfoundland. Its range extends south to northern Minnesota and Wisconsin as well as New England. It is mostly restricted to mountains in the West, where it occurs south to central California, Arizona and New Mexico.

No information is presently available regarding larval foodplants of this species, but it probably feeds on herbaceous vegetation like closely related species.

Adults fly from late May through August in the Pacific Northwest depending on snowpack and elevation. It is nocturnal and comes to lights.