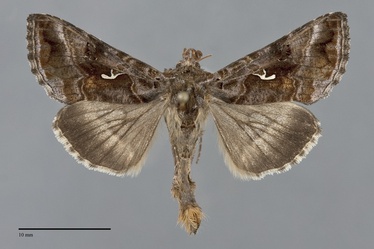 Autographa buraetica is a rarely collected medium-sized moth (FW length 14–16 mm) that flies in northern British Columbia during the summer. It has a mottled brown forewing with a silvery white stigma. The forewing has a weak flange at the anal angle. It is mottled gray-brown and dark brown, darkest in the median area, the distal subterminal area abutting the subterminal line, and in the anterior and mid-terminal area. The fore- and hindwings have a powdery texture due to a scattering of contrasting scales. A patch of warmer brown is present in the fold between the tip of the stigma and the postmedial line. The silver-white stigma has thin, fishhook-shaped basal portions and small, oval lateral portions that are variably attached to each other. The antemedial line is brown, double with a wider and darker outer component and filled with yellowish tan, evident at the costa and below the cubital vein where it is strongly incurved on the trailing margin. The median line is brown, wide, and diffuse. The postmedial line is brown, double with slightly stronger inner component and filled with yellow-tan, strongly drawn toward the base on the costa and undulating straight across the wing across the rest of the wing and focally drawn toward the base near the fold. The subterminal line is irregular with several angled changes in course across the wing, mostly evident as the transition between the dark lateral subterminal area and the lighter terminal area. The terminal line is pale gray-brown followed by dark gray. The fringe is checkered gray-brown and dark gray. The orbicular and reniform spots are thin and pale. The orbicular spot is small and indistinct. The reniform spot is asymmetrically hourglass-shaped, narrow, and upright. It has dark brown along its lateral wall and inside the lower half. The hindwing is light gray-tan with gray postmedial line, poorly demarcated marginal band, and veins. The hindwing fringe has white edge, yellow and gray base, and gray median checkering. The head and thorax are mottled gray-brown with long warmer brown tufts on the posterior thorax. The male antenna is filiform.

This species should only be considered for specimens from northern British Columbia. It is most similar to Autographa pseudogamma but is more mottled brown rather than violet-gray and brown. The median line of A. buraetica is prominent; not so in A. pseudogamma. The postmedial line of A. pseudogamma is irregular in the fold where it is usually associated with an ochre or rusty patch. This line is similar in the fold as elsewhere in A. buraetica, and there is warmer brown near the line in this species but usually no red or yellow color.

The exact habitat of A. buraetica is unknown in British Columbia, but it is likely that it occurs in boreal forest.

Autographa buraetica has been found in the extreme northwestern corner of British Columbia near the border with Yukon Territory. It might be more widespread in the northern part of the province.

This species occurs in the northern and eastern Palaearctic in addition to Northwestern North America, from eastern Russia and Japan to Scandinavia. The New World range includes western Northwest Territories, Yukon Territory, and Alaska in addition to the British Columbia record.

The early stages of A. buraetica are unknown.

This species flies in July.