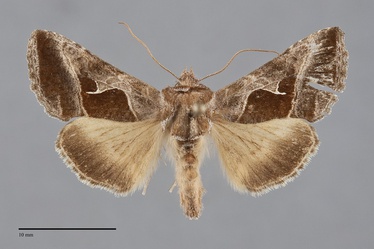 Autographa pasiphaeia is a medium-sized moth (FW length 15 mm) that flies in western Oregon and the Columbia Basin during the summer. It has a gray-brown forewing with a warm brown patch below a thin silvery stigma and a light yellow-gray hindwing with a gray marginal band. The forewing has a slightly pointed apex and a small flange at the anal angle. The ground color is brown-gray from the base to the median subterminal area, slightly darker on the costa and between the spots in the median area. The wing distal to the median subterminal area is smooth dark gray, slightly brownish on the posterior portion. The median area below the stigma and reniform spot is velvety chocolate brown. The silver-white stigma is thin, V-shaped with a thin lateral inferolateral extension. The antemedial line is a gray smudge on the costa, absent in the cell, and light yellow-gray and nearly straight from the cubital vein toward the wing base. The postmedial line is smooth, double, gray-brown filled with yellow-gray, faint near the costa and increasing in strength toward the trailing margin, sharply drawn toward the base on the costa, then oriented obliquely from anterolateral to posteromedial with a slight concave contour toward the base. The subterminal line is pale, only evident near the trailing margin. The terminal line is evident on the anterior half of the wing, pale gray-brown with dark spots between the veins. The fringe is gray with weak darker checkering. The orbicular spot is absent. The reniform spot is thin, pale, faint, with darker filling of the lower half. The hindwing is pale yellow-gray with a diffuse dark gray marginal band and pale gray veins, darker as a remnant of a postmedial line. The fringe has a yellow base and checkered white and gray outer edge. The head and thorax are slightly reddish gray with pale gray edges on the collar and tegulae. Loose dorsal tufts are present on the posterior thorax and several abdominal segments. The male antenna is filiform

This species can usually be identified by its thin stigma, warm brown lower median area, and yellowish and gray hindwing. It is most similar to Anagrapha falcifera, a more common and widespread species in our area. The stigma of this species is more metallic silver in color and its lateral extension is thickened like a teardrop or upper part of a comma, not linear as in A. pasiphaeia. The hindwings are also different. Anagrapha falcifera has a light brown base, not yellowish, with a prominent complete gray postmedial line that A. pasiphaeia lacks.

Autographa pasiphaeia has been found most commonly in the Willamette Valley of western Oregon. It occurs east of the Cascades along the east slope of the southern Oregon Cascades, in Washington's Yakima Valley, and in the adjacent portions of southeastern Washington and northeastern Oregon.

The range of this West Coast species extends south through most of California.

This species feeds on herbaceous plants, particularly hedge-nettle (Stachys spp.) in the Lamiaceae.

The flight period of A. pasiphaeia is late summer and fall.