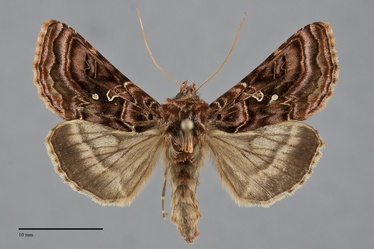 Autographa mappa is a very distinctive, wine-red to violet-brown, medium-sized moth (FW length 15 - 19 mm) that flies in forests in the northern and western parts of our region during the summer. It has concentric lines on the forewing and a bipartite silver to light yellow stigma on the mid-forewing. The forewing has a slightly pointed apex and a small flange at the anal angle. The ground color is purplish red-brown to gray-brown, with a darker dark claret shade between the basal and antemedial lines, in the distal subterminal area abutting the subterminal line, and in the medial terminal area. The stigma is white to pale yellow, with a basal V-shaped component and a separate distal circular to oval spot. A greenish sheen is present in the subterminal and terminal areas near the fold. The basal, antemedial, and postmedial lines are similar dark wine-red, wide, double, and filled with slightly lighter than the ground color. The basal line is evident on the costa, with a dark spot near the mid-forewing base. The antemedial line is prominent across the forewing, offset towards the base in the cell, nearly perpendicular to the wing below the cubital vein but strongly incurved toward to base near the trailing margin. The postmedial line is prominent across the forewing, strongly drawn toward the base on the costa, slightly excurved to the fold where it is focally zigzag before coursing slightly inward to the trailing margin. The dark wine-red median line is strongly zigzagged across the median area, coursing through the reniform spot and forming several jagged teeth in the fold. The subterminal line is slightly irregular and sinuous in course, forming a weak "W" mark near vein CuA1. The terminal line is pale violet to pink medially and gray-brown at the margin. The fringe is similar to the inner part to the terminal line, weakly checkered with dark red-brown. The orbicular and reniform spots are thin and pale, often partially silver or gold. The orbicular spot is round or oval, slightly tilted inward. The reniform is hourglass-shaped and tilted toward the apex, partially surrounded and filled with dark wine-red. The hindwing is gray tan with darker gray postmedial line, ill-defined marginal band, and thin terminal line. The hindwing fringe is pale tan with a yellow-tan base that is partially checkered with dark gray. The head and thorax are mottled red-brown with thin gray tips on the collar, tegulae and long thoracic tufts. Additional red-brown tufts are present on several dorsal abdominal segments. The male antenna is filiform.

This species is unmistakable due to its pattern of concentric light and dark wine-red lines, bipartite stigma, and green sheen. No other North American moth has a similar color and pattern.

This species is widely distributed in moist forest habitats.  In the Pacific Northwest it is usually uncommon, but may be locally common in wet riparian habitats along streams in the rainforest of the Coast Range at low to middle elevations.

Autographa mappa is distributed throughout a large portion of British Columbia and northern Washington, extending south in the Rocky Mountain region to northern Idaho and along the Pacific Coast to northwestern Oregon.

This species is found across the Continent in the boreal zone. The distribution is relatively narrow near the Canada-United States border, extending north to northern Alberta, south of James Bay of Hudson Bay in Ontario and Quebec, and Newfoundland along the Atlantic Coast. It also occurs in the central Rocky Mountains in Colorado and southern Wyoming.

This species feeds on general herbaceous vegetation and low shrubs such as Vaccinium spp. in the Ericaceae, but may prefer feeding on nettles (Urtica spp.-Urticaceae) in wet riparian zones.

This species flies during the summer with most records from late May to early August. It is nocturnal and comes to lights.