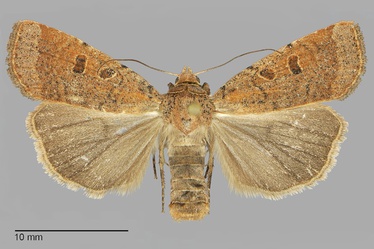 Abagrotis dickeli is a rarely collected, red-brown, small to medium-sized Abagrotis (FW length 12 - 14 mm) that closely resembles reddish specimens of Abagrotis placida, a common variable species in the Pacific Northwest. The ground color of the forewing is smooth red-brown to brown, often darker between the basal and antemedial lines and the postmedial and subterminal lines. The terminal area is lighter, usually a light shade of the ground color but sometimes contrasting gray. The basal, antemedial, and postmedial lines are darker than the ground color, double, and filled with slightly lighter color than the ground color. The antemedial line is slightly irregular and oriented obliquely across the forewing from anteromedial to posterolateral. The postmedial line is typical for the genus, drawn toward the base at the costa, slightly convex toward the margin around the reniform spot, and then slightly oblique toward the base to the trailing margin. The median shade is evident in some specimens. The subterminal line is light and slightly undulating, preceded by a slightly darker shade that does not form a distinct spot at the costa. The orbicular and reniform spots are fairly large, light in color, and filled with a dark shade of the ground or gray. The orbicular spot is usually round and the reniform spot is ovoid or weakly figure-eight shaped. The claviform spot is absent. The hindwing is dark brownish gray, slightly darker gray toward the margin, with a lighter two-toned fringe. The head and thorax match the forewing. The male antenna is filiform.

Abagrotis dickeli is nearly identical to red-brown specimens of A. placida and can only be positively identified by examination of the genitalia or by mitochondrial DNA sequencing (an advanced technique that is only available at some universities). According to Lafontaine (1998) the male valve of A. dickeli has an apical portion that is blade-like and flattened with a gradual increase in width to the apex, while that of A. placida is cylindrical except for an abrupt flattening at the apex. The valve of A. dickeli lacks a triangular process on the inner surface of the valve that is typical of A. placida. Differences in the female genitalia are only evident after dissection and are described and illustrated by Lafontaine (1998). Abagrotis dickeli could also be confused with Abagrotis cupida, another rarely collected orange-brown species. It has a dark spot at the costa medial to the subterminal line that is lacking in A. dickeli.

This species has only been found at one location in the southern Okanagan of British Columbia.

Abagrotis dickeli is known from five widely scattered localities. It has been found in western Manitoba, western Saskatchewan, Wyoming, and at the type locality in Colorado. It is probably more common than is suggested by these few records but goes unrecognized because of its superficial similarity to A. placida.

Adults are single brooded and occur during the summer. The Pacific Northwest records are from mid-July and early August. This species is nocturnal and comes to lights.