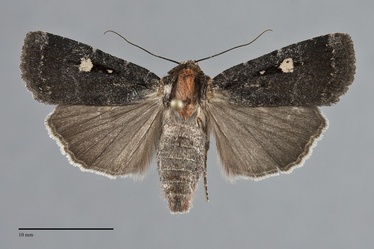 Abagrotis mirabilis is an attractive, medium-sized species (FW length 16 - 18 mm) that occurs in the forest-steppe ecotone during the late summer. It has dark, blackish-gray forewings with cream-colored spots and an orange central thorax. The forewing is nearly uniform blackish gray with scattered gray scales, most densely in the terminal area which is slightly lighter than the rest of the forewing. The basal, antemedial, and postmedial lines are barely evident as the gray filling, and the subterminal line is a series of gray to light yellow spots. The small orbicular spot and the ovoid reniform spot are filled with light yellow. The cell is filled with black, barely evident against the dark ground. The hindwing is dark gray with slightly darker veins and a two-toned gray fringe. The head, collar, and petagiae are dark gray like the forewing while the central thorax is brick red.

This species can only be confused with Abagrotis glenni, but this species is slightly lighter brownish gray so that the contrasting black basal dash, filling of the cell, and a line lateral to the reniform contrast with the ground color. The thorax of A. glenni is usually less red than that of A. mirabilis. Abagrotis rubricundis, found only in western Oregon in our region, is identically patterned to A. mirabilis, but is brick red rather than gray.

This species is widely distributed in dry forests and woodlands.  In the Pacific Northwest, it is usually uncommon to rare in mixed hardwood-conifer forests, spruce-fir forests, ponderosa pine forests, and juniper woodlands at middle to high elevations in the Cascades, Rocky Mountain region, and Great Basin region.  It is most common in oak woodlands and mixed hardwood-conifer forests at low to middle elevations in the Siskiyou region of southwestern Oregon.  This species is considered to be sensitive to forest management due to its dependence on cedars as a larval foodplant.

Abagrotis mirabilis is found in dry open forests as far north as the Lillooet, British Columbia area. It is found along the Cascade Range, east of the crest in Washington but also west of the crest in dry forests in Oregon. It occurs further east in the Blue Mountains of south-eastern Washington and eastern Oregon as well as in Idaho and western Montana. It has not been collected in south-eastern Oregon or in much of southern Idaho.

This species is widely distributed in much of the West. Outside of the Pacific Northwest it has been found in Wyoming, Colorado, and New Mexico in the Rocky Mountain region, Nevada and Arizona in the Southwest, and in northern and southwestern California. No records are shown for Utah in Lafontaine (1998).

Adults are single brooded and fly in summer and early fall. They have been collected from mid-July through September in our region. They are nocturnal and come to lights.