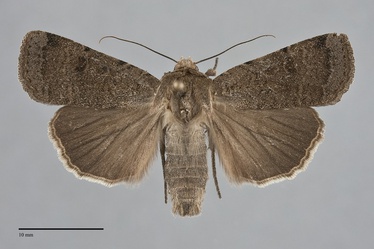 Abagrotis forbesi is a very common and variably-colored medium-sized Abagrotis (FW length15 - 18 mm) that is found in a variety of habitats throughout most of the Pacific Northwest. It is often so common that it frustrates collectors who are looking for rarer species. The forewing is some shade of brown, usually medium gray-brown with a slight orange tint, but paler gray to orange-brown forms are fairly common. The terminal area is usually grayer and lighter, always at the apex but commonly the entire area. The double lines are faintly darker than the ground color but form dark dots at the costa and are filled with barely lighter than the ground color. When visible the antemedial line is irregular and oriented obliquely across the forewing. The postmedial line is usually smooth, rarely with the inner component scalloped, and is drawn sharply toward the base at the costa, is gently convex toward the margin around the reniform spot, and then obliqued toward the base across the fold. The subterminal line is pale but very faint, most evident due to a thin gray shade preceding it that is condensed to a distinct spot at the costa. The median line and claviform spot are absent. The outlines of the orbicular and reniform spots are light. The small orbicular spot is filled with the ground color and is relatively inconspicuous. The reniform spot is either filled with the ground color or darker gray, often darkest at the lower portion but not forming a discreet spot. The hindwing is dark brownish gray with darker veins and a two-toned fringe that is dark gray basally and white distally. The head and thorax are evenly of the forewing color. The male antenna is filiform.

Abagrotis forbesi is similar to many other Abagrotis species, but is most likely to be confused with Abagrotis reedi and Abagrotis orbis in the Pacific Northwest. The forewing lines are lighter and less evident in A. forbesi than in A. reedi. The orbicular spot of A. reedi is less evident because it lacks dark central scaling, but the reniform spot is often more prominent in specimens of A. forbesi than in A. reedi when it contains gray scales. Abagrotis orbis is usually lighter ochre or gray-colored with a distinct dusting of black scales. The reniform spot of A. reedi is entirely filled with blackish gray or contains a distinct dark dot in the lower half. That of A. forbesi is shaded with gray. The males of these species can be distinguished without dissection by brushing the scales from the tips of the valves. Abagrotis forbesi has a narrow distal valve with a tiny triangular process on the medial surface at the base of the valve. The valve of A. reedi is cylindrical beyond the sacculus and lacks the triangular process, while the distal valve of A. orbis is foot-shaped with a process that projects dorsad from the distal portion.

This species is widely distributed in dry forests and rangelands.  In the Pacific Northwest, it is common to abundant in dry, open ponderosa pine forests, juniper woodlands, and on open sagebrush steppe at middle to low elevations east of the Cascades.  West of the Cascades, it has only been found in dry oak woodlands at low elevations in southwestern Oregon. It occurs on remnant grasslands near the Salish Sea in northwestern Washington and southwestern British Columbia.

This species is found throughout most of the Pacific Northwest as far north as Lillooet in southern British Columbia. The range is limited to the Fraser and Okanagan Valleys and southern Vancouver Island in British Columbia. This species is more widely distributed east of the Cascades south of the Canada-United States border where it occurs east to western Montana. The range west of the Cascades is limited to northwestern Washington north of Oregon but is more extensive in Oregon. The range might be limited to the Panhandle and southern parts of Idaho, although this might be an artifact of limited collecting in this state.

This species is found throughout much of the West. The range extends west from the Great Plains where it occurs from northwestern South Dakota to the Texas Panhandle. It is more commonly collected from the Rocky Mountains to the Pacific Northwest and California. The California records are mostly from the eastern parts of the state, extending to the Pacific along the Central Coast and Transverse Ranges.

This species is known to feed on serviceberry (Amelanchier spp.) in the Rosaceae, but it may also feed on bitterbrush (Purshia tridentata) based on the habitat.

Adults have a long flight season and have been found from early June to October in our region. Most specimens were collected in June and July. They are nocturnal and come to lights.