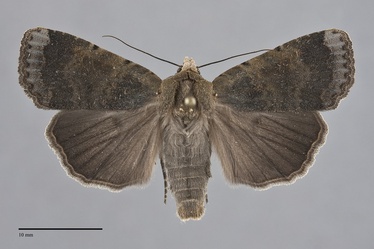 Abagrotis variata is - as the name aptly suggests - a variably-colored Abagrotis. It is moderately large (FW length 16 - 19 mm) with broad forewings. Most specimens are mottled olive-gray, but red-brown, mixed blue-gray and brick red, ochre-brown, and orange-brown forms are fairly frequent. The median area is slightly lighter than the forewing base or the area between the postmedial and subterminal lines. The basal, antemedial, and postmedial lines are darker than the ground color, are filled with slightly lighter shade of the ground color, and form dark spots at the costa. The antemedial line is slightly irregular and is oriented oblique to the wing from antemedial to posterolateral. The postmedial line is slightly concave toward the base opposite the reniform spot. A faint median line is evident in most specimens. The subterminal line is an irregular series of pale spots. The orbicular and reniform spots are pale and filled with the ground color. They are relatively inconspicuous except in forms with light median areas in which they contrast with the adjacent forewing due to their darker filling. The claviform spot is absent. The hindwing is dark brownish gray with slightly darker veins and a two-tone fringe with ochre and gray base and white margin. The thorax matches the forewing, while the head is usually slightly lighter colored. The male antenna is filiform.

This species can usually be identified, despite the variability in color, by its large broad forewings and blue-gray terminal area. Red-brown specimens resemble Abagrotis nefascia in general appearance but are much larger and broader-winged. Rare specimens of A. variata with dark shading near the transverse lines could be mistaken for the very rare species Abagrotis petalama, but the black shading is confined to the distal wing in A. petalama.

The type locality of the synonym Agrotis varix Grote is Vancouver Island.

Abagrotis variata is found in forests or foothills throughout most of our region as far north as the vicinity of Lillooet, British Columbia. It occurs west of the mountains on Vancouver Island, in the Puget Sound in Washington, and in and near the Willamette Valley in Oregon. It is not found in dry steppe away from riparian zones.

This species is found in the Rocky Mountain region south of south-western Alberta to New Mexico. It occurs in central Utah and northern and eastern Arizona, but no Nevada records are shown in Lafontaine (1998). It is found throughout much of California except in the Central Valley or dry south-east portion of the state.

This species is a generalist feeding on many kinds of hardwoods and some herbaceous plants, including willows (Salix spp.) in the Salicaceae, cherry (Prunus spp.) and serviceberry (Amelanchier spp.) in the Rosaceae, and alders (Alnus spp.) in the Betulaceae.

Records for this species span early June to mid-September in our region, although most specimens have been collected in July and August. It is nocturnal and comes to lights.