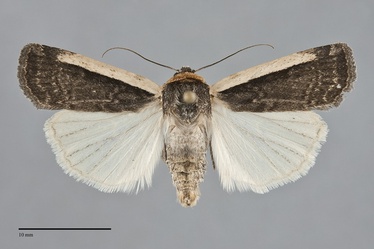 Abagrotis vittifrons is a distinctive, small to medium-sized noctuid moth (FW length 13 - 17 mm) that flies in sage steppe and dry forest in late summer and fall. It has dark gray forewings with a cream-colored costa and collar and a white hindwing. The forewing is slightly powdery, dull gray with markings limited to the lines and spots that are incompletely filled with cream. The subterminal line usually forms a series of spots across the distal wing. The costa is cream from the base to the postmedial line. The small spots are barely evident as lighter filling. The hindwing veins are light gray. The head and thorax are gray like the forewing with a cream collar. The male antenna is filiform.

Abagrotis vittifrons is unmistakable because of its unique pattern of a cream costa on a gray forewing.

This species flies on arid rangelands.  In the Pacific Northwest, it is common in juniper woodlands and on dry, open sagebrush steppe at middle to low elevations east of the Cascades.  Numbers of this species were greatly reduced on sagebrush steppe burned over in a wildfire during the previous two years, compared to adjacent unburned habitat.  This species appears to be intolerant of fire disturbance due to the probable loss of the foodplant.

Abagrotis vittifrons occurs in dry steppe and open forested grasslands from the vicinity of Lillooet, British Columbia southward. The range in southern British Columbia is limited to the dry Fraser Valley and Okanagan. The species is more widespread in the interior of Washington, Oregon, Idaho, and western Montana.

No information is presently available regarding larval foodplants of this species, but it is suspected to be a specialist feeding on big sagebrush (Artemisia tridentata) in the Asteraceae based on the habitat.

Adults have been collected from late June to mid-September but are most commonly found in late August and early September.