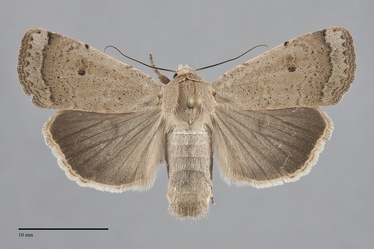 Abagrotis orbis is a broad-winged, medium-sized Abagrotis (FW length 16–18 mm) that is usually pale gray-brown with a narrow reniform spot with the lower half filled with black scales. The ground color varies from putty gray, light gray-brown, to light orange-brown and is sprinkled with black scales to produce a slightly powdery look. The terminal area is usually lighter slightly blue-gray, accentuated by the pale subterminal line and preceding even thin gray shade. The basal, antemedial, and postmedial lines are very faint except for dots at the costa, slightly darker than the ground color elsewhere, double, and filled with the ground color. The orbicular spot is pale, small, and round and is usually filled with the ground but occasionally darker scales. The reniform is similar but is more prominent due to filling of dark gray to black scales, often forming a black dot in the lower portion. The hindwing is dark brownish gray with a light two-toned fringe. The head and thorax are even and match the forewing in color. The male antenna is filiform.

This species is similar to Abagrotis forbesi, which is more common and widespread. Abagrotis forbesi tends to have more narrow wings than A. orbis, the ground color is smoother without a sprinkling of black scales, and its reniform spot is entirely filled with dark rather than just in the lower portion. The markings of A. orbis are crisper than those of A. forbesi, most evident when the species are viewed side by side. Males can be distinguished by brushing the scales from the tips of the valves of the genitalia and viewing them under moderate magnification. The distal valves of A. orbis have a foot-shaped process that projects dorsad from the tip of the valve while those of A. forbesi taper to a point without a bend or process near the tip. Abagrotis forbesi also resembles Abagrotis baueri, a powdery orange-brown species with dark-filled spots that usually flies in areas with oaks. It is smaller than A. orbis and has narrower wings and darker double lines that are much more conspicuous than those of A. orbis.

This species occurs in dry regions at low elevations, particularly in disturbed agricultural areas such as orchards and urban areas.  In the Pacific Northwest, it is usually very rare and sporadic except in fruit orchards at low elevations east of the Cascades.  The more natural habitat may be riparian zones along creeks and rivers. It is not commonly collected in natural brush steppe habitats nor on dry ridgetops like other Abagrotis, including the similar species A. forbesi.

Abagrotis orbis is distributed in the dry interior of our region from the southern Okanagan in British Columbia, the Columbia Basin, southeastern Oregon, and southern Idaho. It also occurs in the Willamette Valley in western Oregon and in the southern Puget Sound region in Washington.

This species occurs throughout much of the American West as far north as southern Canada. The eastern limit of its range is the Great Plains in the eastern Dakotas and Nebraska. A disjunct population is found on dunes and lakeshores in the southern Great Lakes region.

This species is a generalist feeding on many kinds of hardwoods including such families as Rosaceae, Salicaceae, Aceraceae, and Vitaceae.  It may be a serious agricultural pest in fruit orchards.

Adults are found in the summer from mid-June to early September in our area. It is nocturnal and comes to lights.

This species is often a serious agricultural pest in fruit orchards, severely damaging crops of apples, cherries, peaches, and grapes by feeding on the flowers and developing fruit.