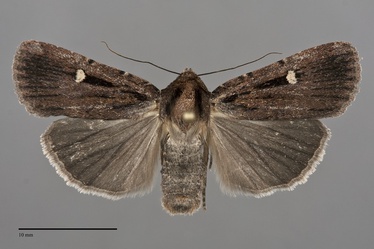 Abagrotis striata is a medium-sized (FW length 15–17 mm), dark reddish brown-gray moth that flies near junipers in southern Idaho during the summer. It has a gray thorax with a central brown area and a forewing with cream-colored reniform spots as well as black horizontal streaks at the base, in the cell, and on the distal area. The forewing is slightly variable, either dark reddish gray-brown, sometimes with a slight violet tint.  The distal terminal area is slightly lighter, especially near the apex, without a strong contrast in darkness with the subterminal area. A black basal dash is fused to the black claviform spot to produce a long basal streak that extends as far lateral as the reniform spot. The cell is filled with black; usually continuing as a thinner streak from the reniform spot. A series of uniform black lines extend from the mid-subterminal area to the outer margin, and some of the adjacent veins are also black to produce a strongly streaked appearance to the distal wing.  The transverse lines are evident as double gray marks on the costa. The fringe is dark gray. The reniform spot is relatively small, triangular, filled with light yellow. The orbicular spot is usually absent. The hindwing is dark gray with a two-toned gray and white fringe. The head, collar, and patagiae are gray, while the central thorax is tan to light reddish brown. The male antenna is filiform.

This moth can usually be identified by its southeastern Idaho distribution, smooth red-brown color, light ochre reniform spot, and streaked distal forewing lacking a lighter terminal area.  It is most similar to Abagrotis glenni, with which it flies.  This species has a less streaky distal forewing with a lighter-colored terminal area that contrasts with the dark subterminal area.  In addition, its light-colored reniform spot is relatively large compared to that of A. striata and its ground color is darker gray or brown-gray in most cases, not red-brown.

This species flies in open juniper forests in the Central Basin and Range Ecoregion.

Abagrotis striata has only been found in southeastern Idaho along the south slope of the Black Pine Mountains. It is likely to be more widely distributed in this portion of Idaho, but is probably not widespread in our region.

The range of this species includes the Four Corner States in the southern Rocky Mountain region as well as southern California.

The larva of A. striata is unknown. It most likely feeds on juniper (Juniperus spp.,  Cupressaceae) based on the preferences of related species.

The adults fly during late summer and fall. The only records of this moth from Idaho are from late July.