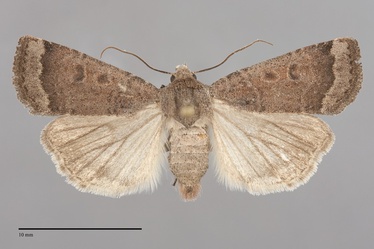 Abagrotis hermina is a relatively small, gray-brown, rarely orange-brown, Abagrotis (FW length 13 - 14 mm) with small, dark-filled forewing spots and a terminal area that is paler gray than the rest of the forewing. The ground color is usually even brownish gray, occasionally with a reddish flush, darkest distally medial to the subterminal line. The terminal area is lighter gray, sometimes with a slight blue tint. The basal, antemedial, and postmedial lines are slightly darker than the ground, double, smooth, and filled with the ground color. They do not form distinct spots on the costa as in many other Abagrotis species. Most specimens lack any trace of a median line. The subterminal line is slightly lighter than the ground color and is slightly uneven. It is most evident as the interface between the dark area medial to it and the lighter gray distal to it. The orbicular and reniform spots are similar, light filled with slightly darker than the ground color. Both spots are fairly small. The claviform spot is absent. The hindwing is light brownish gray with darker gray discal spot, veins, and mottled submarginal band. The fringe is lighter two-toned whitish gray. The head and thorax match the forewing ground color. The male antenna is filiform.

This small species resembles Abagrotis dodi, a more orange-brown species that flies at higher elevations. In addition to the difference in color, A. dodi has a darker forewing margin, including the terminal area, and a contrasting yellow to light orange subterminal line as well as a more uniform dark gray hindwing. In A. hermina the terminal area is lighter gray than the rest of the forewing, the subterminal line is less conspicuous, and the hindwing is light with mottled gray near the margin. Abagrotis hermina also resembles Abagrotis placida, a highly variable species in terms of forewing color. Gray specimens of A. placida can usually be distinguished from it by more prominent forewing lines, including a distinct dark median line, and darker and more uniform gray hindwings. Males of A. placida have a diagnositic triangular tooth-like process on the inner surface of the valve that can be observed by brushing the scales from the top of the abdomen. Males of A. hermina lack this feature.

This species is primarily found on the dry short-grass prairies of the Great Plains, but also occurs in arid rangelands and forests west of the Rocky Mountains.  In the Pacific Northwest, it is very rare and sporadic on dry sagebrush steppe at low elevations east of the Cascades. This species does not fly on high-elevation ridges unlike many of the other members of the genus.

Abagrotis hermina is found in the dry interiors of Washington and Oregon. It also occurs in Idaho and western Montana.

This species is found across the northern Great Plains to eastern North Dakota. The range extends south to northern New Mexico and northern Arizona, thence west to eastern California near Mono Lake.

Adults fly from early summer to early fall but are most commonly collected in August. They are nocturnal and come to lights. This species has also been collected at bait in eastern Washington.