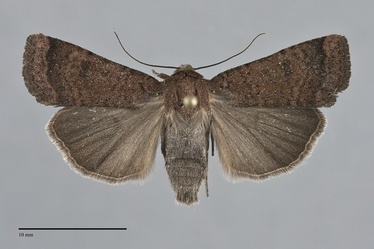 Abagrotis reedi is a common, dark brown, medium-sized Abagrotis (FW length 14 - 16 mm) with a faint pattern of double lines and dark-filled spots in various shades of the ground color. The forewing is most often dark brown, occasionally medium-dark brown or medium-dark orange-brown, darkest near the costa medial to the subterminal line. The terminal area is lighter, usually a lighter shade of the ground color but occasionally grayer near the apex. The basal, antemedial, and postmedial lines are dark brown, double, smooth, and filled with the ground color or slightly lighter brown. The median line is very faint or absent. The subterminal line is pale and slightly irregular, often only evident as a transition from dark to light. The spots are light brown and filled with slightly darker brown. The orbicular spot is usually round, while the reniform spot is ovoid or weakly figure-eight shaped. The claviform spot is absent. The hindwing is dark brownish gray with faintly darker discal spot and veins. The fringe is two-toned, gray basally and white distally. The head and thorax are evenly colored like the forewing. The male antenna is filiform.

Abagrotis reedi is most easily confused with dark specimens of A. forbesi and gray-brown forms of A. placida. The latter species differs from A. reedi in having a lighter gray terminal area, a distinct dark median line, and larger spots. Males can easily be distinguished by brushing the scales from the tips of the valves because the valve of A. reedi is very thin distal to the sacculus while that of A. placida tapers gradually to the tip and has a unique triangular process along the inner survace distal to the sacculus that all other Abagrotis species lack. Abagrotis forbesi has less distinct forewing lines that A. reedi that area most evident as dark spots on the costa. In addition, the orbicular spot of A. forbesi is usually filled with the ground color, not slightly darker than the ground as in A. reedi. Males can be distinguished by examination of the distal valves. Those of A. forbesi have a small triangular process at the base of the narrow distal valve which those of A. reedi lack.

This species occurs in dry forests and riparian habitats.  In the Pacific Northwest, it is most common in oak savanna and oak woodlands at low elevations west of the Cascades.  It is also common in mixed hardwood-conifer forests, ponderosa pine forests, and juniper woodlands at middle elevations along the east slope of the Cascades and in the Rocky Mountain region.  It also occurs on dry, open ridgetops at high elevations in the Rocky Mountain region, on open sagebrush steppe at low elevations in the Great Basin region, and in the riparian zone along creeks and rivers.

Abagrotis reedi is found throughout much of the Pacific Northwest except in wet forests near the Pacific Coast and in the driest deserts. It occurs in southern British Columbia, including on Vancouver Island, as far north as near Lillooet. It is predominantly found in eastern Washington but occurs on both sides of the Cascade Mountains in Oregon. Idaho records are limited to the Snake River Plain. This species has also been collected in western Montana.

This species has a wide distribution in western North America. It occurs throughout the region bounded by a line across southern Canada from British Columbia to southwestern Manitoba, the western Great Plains from there to New Mexico, the Mexico-United States border, and the Pacific Coast.

This species appears to be a generalist feeding on many kinds of hardwoods in such families as the Salicaceae, Rosaceae, and Aceraceae.

Adults have a long flight period and have been collected from late June to mid-September in our region. They are nocturnal and come to lights. They have also been taken at sugar bait in eastern Washington.