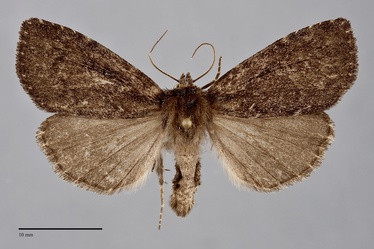 Xestia atrata is a rarely collected, medium to large noctuid moth (FW length 15 - 21 mm) that flies in eastern British Columbia during the summer in our region. It has broad, powdery, nearly even, dark brown forewings with faint markings. The transverse lines are very faintly darker, as are the orbicular and reniform spot. The tips of the teeth of the postmedial line are marked by a series of pale spots in some specimens, and distal costal and outer margins are marked by a series of pale dots. The hindwing is dark gray with a thin dark terminal line and concolorous fringe. The head and thorax match the forewing. The male antenna is bead-like.

This species can be identified by its broad forewing shape and nearly unmarked brown forewing. It is most similar to Xestia ursae, but the ranges of these species are not known to overlap at present, although it is plausible that both occur in northern British Columbia. They can be distinguished by the black spots on the forewing of X. ursae. Similarly, X. atrata can be told from Graphiphora augur, another dull dark brown species, by the absence of black-outlined spots.

The populations of X. atrata are divided into two subspecies by Lafontaine (1998). The nominate subspecies is currently known from British Columbia. The northern subspecies X. a. yukona (McDunnough) is likely to occur in the northern part of the province. It is smaller and paler than X. a. atrata.

Xestia is a large and diverse genus found throughout temperate, alpine, and arctic portions of the Northern Hemisphere. The genus is subdivided into three subgenera, Xestia, Megasema, and Pachnobia, by Lafontaine (1998). The genus is defined by a thumb-like ventral extension called the pollex which arises from the base of the clasper of the male valve. Over half of the North American species are found in the Northwest. Xestia atrata is a member of the subgenus Pachnobia.

This species is occurs in arctic tundra and boreal spruce-fir forests, extending southward at high elevations in the alpine zone of the Rocky Mountain region.  It is rare and sporadic in the Pacific Northwest. The habitat in the Northwest is not known.

The range of Xestia atrata is limited to south-eastern British Columbia. However, it is likely that it also occurs in the northern part of the province (Lafontaine 1998).

Xestia atrata has a Holarctic distribution. It occurs in eastern Siberia in the Old World. In North America it has been found from eastern Alaska to Labrador south to Lake Superior and northern New England in the East. The range extends south through the Rocky Mountains to northern Colorado.

Xestia atrata flies from late June to early August across its entire range (Lafontaine 1998). It is nocturnal and comes to light.