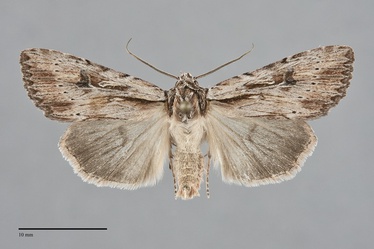 Xestia infimatis is the brownest and latest-flying of four similar longitudinally streaked Xestia species that occur in the Pacific Northwest. It is medium-sized (FW length 14 - 19 mm; females slightly smaller than males) with heavily streaked forewings due to dark veins and accentuation of the horizontal elements of the lines and spots. The ground color varies from light gray and tan, dark brown-gray, to wood brown in males, and is grayer in females. The terminal area has patches of dark gray to brown opposite the cell and in the fold in both sexes and the costa is slightly lighter and grayer than the ground in brown specimens. A black basal dash is present, which appears very long because it is fused with the anterior component of the claviform spot. The transverse lines are faint, except for a series of spots along the costa. The postmedial line is most evident, evident as a series of dark and light spots marking the tips of the teeth. The orbicular spot is black with an inner white component, long and very thin, and filled with a thin streak of the ground color. The reniform is similar, usually with the posteromedial portion drawn sharply toward the base reaching beyond the medial orbicular spot. The hindwing is slightly brownish-gray, darker gray toward the margin, with gray discal spot and veins, and a two-toned gray fringe. The head and thorax are similar in color to the forewings with gray and brown stripes across the dorsal collar and dark margins to the tegulae. The male antenna is strongly biserrate.

Xestia is a large and diverse genus found throughout temperate, alpine, and arctic portions of the Northern Hemisphere. The genus is subdivided into three subgenera, Xestia, Megasema, and Pachnobia, by Lafontaine (1998). The genus is defined by a thumb-like ventral extension called the pollex which arises from the base of the clasper of the male valve. Xestia infimatis is placed in the subgenus Xestia.

This species is widely distributed in many types of habitat along the West Coast.  West of the Cascades, it is moderately common in dry grasslands, oak savanna, oak woodlands, mixed hardwood forests, coastal rainforests, and mixed hardwood-conifer forests at low to middle elevations.  East of the Cascades, it occurs in dry, open ponderosa pine forests and juniper woodlands at middle elevations, and in the riparian zone along creeks and rivers at low elevations.

This species has a similar West Coast distribution to that of X. finatimis, although the range in eastern British Columbia is limited to the Okanagan Region just north of Washington. It occurs from the Olympic Peninsula of Washington and Vancouver Island east to the Idaho Panhandle and northwestern Montana. It is common throughout much of eastern Washington and most of Oregon, although it is more commonly found in forests than in dry steppe.

The range extends south through California to near Mexico. It is found across the width of northern California, west of the eastern Sierra Nevada foothills in the central part of the state, and only along the west coast south of Monterey Bay.

This species is known to feed on hardwoods such as serviceberry (Amelanchier spp.) in the Rosaceae and alders (Alnus spp.) in the Betulaceae, but is also reported to feed on herbaceous vegetation.  It appears to be a foodplant generalist.

Adults occur in the fall, usually slightly later than X. finatimis. Records from the Northwest are from late July to mid-October, with most from September.