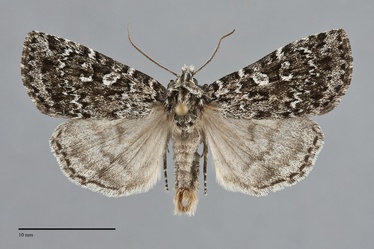 Xestia mixta is a medium-sized noctuid moth (FW length 16 - 19 mm) with a powdery dark gray forewing marked with crisp black and white lines and spots that flies in subalpine forests near the Alberta-British Columbia border. Most of the forewing is slightly mottled, dark gray with a salt-and-pepper look to it due to a mixture of black and white scales. The lines are black, double, and filled with white. The basal and antemedial lines are irregular, and the latter is oriented obliquely to the wing with the posterior aspect furthest from the base. The postmedial line is dentate, often with black and white spots along the veins at the tips of the teeth that appear as a row of white spots against the darker background, sharply drawn toward the base at the costa, transverse to the wing near the reniform spot, and obliqued toward the base below the spot. The median line is sometimes evident in lighter individuals. The subterminal line is pale, even and nearly straight across the wing. A series of black chevrons preceding this line are strongest at the apex, opposite the cell, and in the fold. The terminal line is a series of black bars or chevrons between the veins. The fringe is checkered light and dark gray. The orbicular and reniform spots are similar, black with white inner line and gray central filling that is most prominent in the reniform spot. The orbicular is fairly large, a slightly irregular oval. The reniform spot is kidney-shaped. The claviform spot is small and black. The hindwing is light silvery gray with dark gray suffusion, discal spot, wavy to scalloped postmedial ine, submarginal band, terminal line, and veins. Its fringe is pale gray with weak checkering on the veins. The head and thorax are grizzled black and white. The male antenna is bead-like or weakly biserrate.

Xestia mixta can be distinguished from other similar Xestia species that occur in similar habitats by the extensive gray filling of the reniform spot. It is close in appearance to Xestia speciosa and the two species occur together in the Rocky Mountains in Canada. Xestia mixta is slightly smaller and has more crisply defined forewing markings. The male antenna of X. mixta is narrower, usually bead-like with rounded individual segments while that of X. speciosa is biserrate with triangular segments.

Xestia is a large and diverse genus found throughout temperate, alpine, and arctic portions of the Northern Hemisphere. The genus is subdivided into three subgenera, Xestia, Megasema, and Pachnobia, by Lafontaine (1998). The genus is defined by a thumb-like ventral extension called the pollex which arises from the base of the clasper of the male valve. Over half of the North American species are found in the Northwest. Xestia mixta belongs to the subgenus Pachnobia.

This species replaces X. speciosa in much of the eastern North American subarctic. The range extends west to the Rocky Mountains of Alberta where the ranges of these two species overlap.

The adults fly in the summer in July and August. They are nocturnal and come to lights.