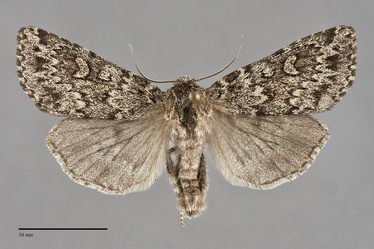 Xestia perquiritata is a powdery gray to black, medium-sized moth (FW length 17–23 mm) that flies in high-elevation conifer forests and along the Pacific Ocean. Its forewing has jagged, dark lines filled with whitish-gray and a cresent-shaped pale reniform spot. The forewing ground color is typically salt-and-pepper gray with a nearly equal mixture of black and white scales. The double black lines are very irregular. The postmedial line is deeply dentate. The terminal wing is dominated by a series of large black wedges that mark the position of the subterminal line between the veins, strongest at the costa, opposite the cell, and in the fold. The orbicular and reniform spots are similar, black with light whitish gray filling. The former is round while the latter is deeply indented laterally forming a sideways heart, crescent, or boomerang shape. The claviform spot is small. The hindwing is medium gray with slightly darker margin, discal spot, scalloped postmedial line, and terminal line. Its fringe is pale gray with slight dark gray checkering. The head and thorax are hoary dark gray with a dark tip to the collar. The male antenna is bead-like.

Xestia perquiritata is most similar to Cosmia elisae in size, shape, and forewing pattern. Both species have an angular pale-filled reniform spot. The antemedial line of X. perquiritata is very irregular, while that of C. elisae is smooth and oriented obliquely across the forewing. It is also similar to several powdery gray Xestia species with which it flies (Xestia speciosa, Xestia mixta, Xestia lupa) but can be separated from all of them by its light gray-filled crescent-shaped reniform spot in combination with a row of distinct black wedges near the forewing margin.

Most Pacific Northwest populations of this species are subspecies X. p. partita (McDunnough) which is larger with more muted maculation than the nominate subspecies from eastern and north-central North America. Those from the immediate Pacific Coast in Oregon and Washington are larger and melanic, dark blackish brown, with contrasting white filling of the lines and spots. These were described recently as subspecies X. p. orca Crabo & Hammond.

Xestia is a large and diverse genus found throughout temperate, alpine, and arctic portions of the Northern Hemisphere. The genus is subdivided into three subgenera, Xestia, Megasema, and Pachnobia, by Lafontaine (1998). The genus is defined by a thumb-like ventral extension called the pollex which arises from the base of the clasper of the male valve. Over half of the North American species are found in the Northwest. Xestia perquiritata belongs to the subgenus Pachnobia.

This species is widely distributed in boreal spruce-fir forests.  In the Pacific Northwest, it is relatively rare and sporadic, with most populations confined to high elevations. However, it can be fairly common in the proper habitat. A disjunct population occurs at sea level in coastal rainforests of Sitka spruce along the Pacific Ocean. Individuals of this population are rarely collected.

Xestia perquiritata is found in mountains in central and southern British Columbia, the Cascade Range south to Douglas County, Oregon, north-eastern Washington and the adjacent Idaho Panhandle, and western Montana. A large dark population of this species is found in Sitka spruce forest along the immediate Pacific Coast of Oregon and Washington from Newport, Oregon to Neah Bay, Washington.

This species is found in subarctic and boreal zone forest across Canada and the northern United States. It occurs from Yukon Territory to northern Quebec and Labrador in the north, and northern New England, Lake Superior, and southern Oregon in the south. The range extends further south in the Rocky Mountains to Colorado. An apparently disjunct record from eastern North Carolina is shown by Lafontaine (1998).

This species is a foodplant specialist feeding on true firs (Abies spp.) and spruces (Picea spp.) in the Pinaceae.  In the Pacific Northwest, the primary larval foodplants appear to be Engelmann spruce (P. engelmannii) in the Cascades and Rocky Mountains, and Sitka spruce (P. sitchensis) in coastal rainforests.

Xestia perquiritata flies in the summer, with Northwest records from mid-June through August. The coast population flies in early to mid-August. This species is nocturnal and comes to lights.