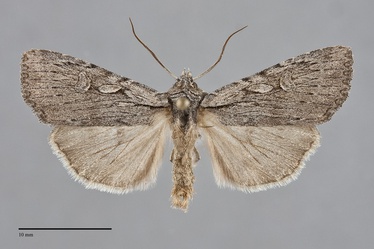 Xestia vernilis is the most easterly distributed of four similar finely streaked gray Xestia species that are found in our region. It is a medium-sized noctuid (FW length 15 - 19 mm) with nearly even steel gray forewings with thin dark veins and lines. The terminal area is slightly darker gray. A thin, black basal dash is present. The transverse lines are very thin except at the costa, zig-zagged and dentate, blending with the longitudinal streaking produced by the veins. The orbicular spot is black, shaped like a long thin oval or diamond, and filled with whitish gray. The reniform spots is variable from nearly absent to slightly less evident than the orbicular spot, thin, black, and filled with the ground color. The claviform is only evident as a black continuation of the basal dash. The hindwing is light luteous gray with slightly darker gray discal spot, postmedial line that is absent to evident as dark marks on the veins, and terminal line. The hindwing fringe is pale whitish gray. The head and thorax gray with a transverse line across the distal third of the collar. The male antenna is biserrate.

Xestia vernilis can usually be recognized due to its even gray color, fine longitudinal streaking, and long pale-filled orbicular spot. It is limited to southeastern British Columbia and central and eastern Idaho in the Pacific Northwest and is therefore only likely to be confused with Xestia infimatis. This species has tan and red-brown patches and streaks on the distal forewing that are lacking in X. vernilis. Xestia verniloides, named because of its similarity to X. vernilis, has a restricted range in southwestern British Columbia and adjacent Washington well west of the range of X. vernilis.

Xestia is a large and diverse genus found throughout temperate, alpine, and arctic portions of the Northern Hemisphere. The genus is subdivided into three subgenera, Xestia, Megasema, and Pachnobia, by Lafontaine (1998). The genus is defined by a thumb-like ventral extension called the pollex which arises from the base of the clasper of the male valve. Xestia vernilis is placed in the subgenus Xestia.

This species is widely distributed throughout the Rocky Mountains in coniferous forest habitats of pine, spruce, and fir.  It is replaced in similar habitats throughout the Pacific Northwest by X. finatimis, which may be a subspecies.

Xestia vernilis has a Rocky Mountain distribution and as such is found in the far eastern portion of the Northwest. Records extend from south-eastern British Columbia, western Montana, and central and south-eastern Idaho. The occurrence of this species in the Blue Mountains of Oregon needs verification.

This species is found in the Rocky Mountains from west-central Alberta to south-western Utah, eastern Arizona, and northern New Mexico.

No information is presently available regarding larval foodplants of this species, but it probably feeds on various hardwoods based on closely related species.

The adults fly in late summer and early fall. Records from our region span late July through September. It is nocturnal and comes to lights.