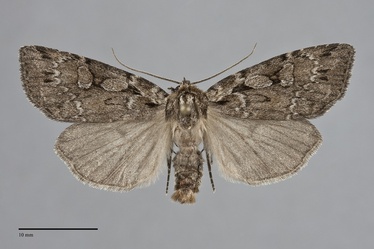 Xestia homogena is a fairly large, light gray Xestia (FW length 18 - 21 mm) with large, pale gray-filled forewing spots, a black basal dash, and a series of long black wedge-shaped marks medial to the subterminal line below the apex. It flies in subalpine forests during the summer. The ground color is even and slightly powdery silver-gray. A black basal dash is present, a black line connects the spots across the posterior cell, and most specimens also have a black mark at the medial orbicular spot in many specimens. The black marks medial to the subterminal line in many related Xestia species are very long at the apex and opposite the cell, while those near the anal angle are small smudged spots. The lines are dark gray. The antemedial line is smooth, except for a sharp tooth toward the base on vein 1A+2A. The postmedial line is moderately scalloped between the veins and is bordered on the outer margin by a pale line. The indistinct median line is faint to absent. The pale subterminal line is smooth but often lacking, although its position is indicated by the black wedge marks that precede it. The orbicular and reniform spots are black and filled with whitish gray. The orbicular spot is a large oval, partially open toward the costa along its medial end. The reniform spot is large. The claviform spot is small or large, sometimes reduced to a line consisting of its anterior portion. The hindwing is powdery light gray with indistinct darker gray discal spot, faint submarginal shade, and thin terminal line. Its fringe is slightly lighter whitish gray. The head and thorax are light gray. The male antenna is weakly biserrate.

This species is most similar to Xestia fabulosa. This species has a teardrop-shaped orbicular spot that is completely open toward the costa and touches the reniform spot, and an indistinct crescent-shaped reniform. Xestia homogena differs in having a black line along the anterolateral aspect of the orbicular spot, greater distance in the cell between the spots, and a large kidney-shaped reniform spot. Xestia homogena also resembles Aplectoides condita. It is usually larger and lighter colored than this species and lacks red-brown color that most specimens of A. condita have on the distal forewing. In addition, the long black wedges near the apex of the forewing of X. homogena are lacking in this species.

Xestia is a large and diverse genus found throughout temperate, alpine, and arctic portions of the Northern Hemisphere. The genus is subdivided into three subgenera, Xestia, Megasema, and Pachnobia, by Lafontaine (1998). The genus is defined by a thumb-like ventral extension called the pollex which arises from the base of the clasper of the male valve. Over half of the North American species are found in the Northwest. Xestia homogena belongs to the subgenus Pachnobia.

This species is widely distributed in boreal spruce-fir forests across Canada, and is confined to high elevation subalpine forests in our region.  It is usually rare and sporadic, even in the proper habitat.

This species occurs across the North American Continent from Alaska to Labrador and northern New England. Its range extends south in the Rocky Mountains in Alberta and adjacent British Columbia, Montana, and Colorado as well as in the Northwest.

No information is presently available regarding larval foodplants of this species, but it may feed on spruces (Picea spp.) in the Pinaceae based on closely related species.

Adults fly in the summer with other high-elevation Xestia species and are on the wing in July and August in our region. They are nocturnal and come to lights. This species flies in forest and shuns open areas.