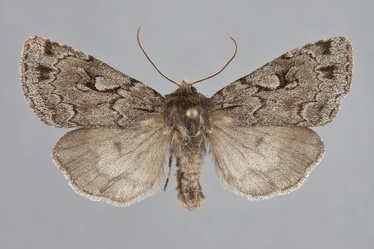 Xestia fabulosa is a dusky gray, medium-sized noctuid moth (FW length 17 - 19 mm) marked with a very large oval orbicular spot that is open to the costa, abutting a smaller and usually indistinct crescent-shaped reniform spot that contains faint dark gray or reddish scales. It flies in subalpine forests in northern Washington and British Columbia during the summer. The forewing ground color is even medium-dark dusty gray with a slight brownish tint. A faint darker median shade and similar gray medial to the subterminal line produces slight mottling in these area. A small basal dash is present. The lines are dark gray to black. The antemedial line is irregular, zig-zag near the trailing margin. The postmedial line is scalloped. It is drawn toward the base at the costa, widely convex to near the subterminal line from near the costa to the fold, and thence slightly obliqued toward the base near the trailing margin. The subtermina line is pale, faint, and preceded by a black bar at the costa and two slightly ill-defined chevrons opposite the cell. The terminal line is a  series of dark lines between the veins. The orbicular spot is very large, ovoid with a slightly narrower medial end, open to the costa and filling the cell from the antemedial line to the reniform spot, and filled with slightly lighter gray than the ground color. Its posterior margin appears thick due to filling of the remainder of the cell with dark gray. The lateral orbicular is close to the crescent-shaped reniform spot and appear to be joined to it because the intervening cell is dark. The reniform spot is usually faint, especially the lateral portion, and contains a faint red-brown smudge in most Pacific Northwest specimens. A black line in the posterior cell continues into the posterior reniform spot in many specimens. The claviform spot is variable, small or absent. The hindwing is light to medium-dark gray with an indistinct darker discal spot, wavy postmedial line, and thin terminal line. The fringe is similar in color. The head and thorax are mouse gray. The male antenna is bead-like.

This gray species can be identified by the shape and color of the forewing spots. The large orbicular spot shaped like a sideways teardrop and is open anteriorly in combination with an indistinct crescent-shaped reniform spot that contains reddish scales and/or a black mark in its inferior portion are diagnostic of this moth. Xestia homogena has a large oval orbicular spot, but the anterior portion of the spot is partially outline in black and its reniform spot is also large and pale-filled unlike those of X. fabulosa.

Xestia is a large and diverse genus found throughout temperate, alpine, and arctic portions of the Northern Hemisphere. The genus is subdivided into three subgenera, Xestia, Megasema, and Pachnobia, by Lafontaine (1998). The genus is defined by a thumb-like ventral extension called the pollex which arises from the base of the clasper of the male valve. Over half of the North American species are found in the Northwest. Xestia fabulosa belongs to the subgenus Pachnobia.

Larva is smooth, pale mottled gray with alternating black and white dorsal spots and a thin black lateral line.  It is illustrated by Lafontaine (1998).

This species is widely distributed across Canada and in the Rocky Mountains in boreal and montane spruce-fir forests. Our populations occur in high-elevation subalpine forests.

Outside of the Northwest this species occurs across boreal and subarctic North America from central Yukon to Labrador and northern New England. It is also found in the Rocky Mountains in Alberta and Colorado.

This species appears to be a generalist, and is known to feed on both spruces (Picea spp.) in the Pinaceae and huckleberries (Vaccinium spp.) in the Ericaceae.

Adults fly during summer and have been collected in July and August in the Northwest. They are nocturnal and come to light.