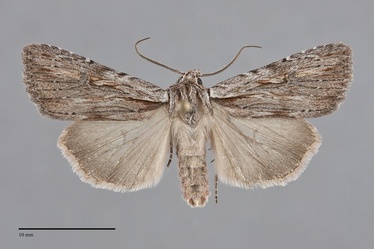 Xestia finatimis is a longitudinally streaked, light gray, medium-sized Xestia (FW length 14 - 19 mm) that flies in forests throughout the Pacific Northwest during the summer. It has areas of tan and reddish brown on the distal forewing. The forewings of both sexes are similar, light to medium gray with patches of light warm tan to reddish brown near the cell and on the distal forewing. Slightly darker patches of gray to red-brown are present in the terminal area opposite the cell and in the fold. The entire forewing is finely streaked due to dark veins and accentuation of the horizontal elements of the lines and spots. A thin black basal dash is present which appears long because it is fused with the anterior portion of the claviform spot. The transverse lines are obscure except at the costa where they form dark spots. The postmedial line is most evident as a series of long thin spots on the veins and as the slightly lighter filling between these spots. The gray median line is prominent across the wing, including in the reniform spot, in about half of all specimens. The hindwing is light brownish gray, darker gray toward the margin, with faintly darker discal spot and veins. The fringe is lighter and has a faint pink tint in some individuals. The head and thorax are similar to the forewing in color with horizontal barring across the distal collar and dark edges along the lateral tegulae. The male antenna is strongly biserrate.

The four species in the Xestia infimatis species-group are all similar in appearance. Xestia finatimis overlaps in appearance with the other three species and can be confused with any of them. It is most broadly sympatric with Xestia infimatis in our area but can usually be identified by lighter gray color in both sexes, more heavily streaked in X. infimatis which has browner males and darker gray females. Xestia finatimis emerges several weeks earlier in the year than X. infimatis and is usually worn when X. infimatis is fresh. Xestia vernilis, limited to the eastern part of the Northwest, and Xestia verniloides, limited to southwestern British Columbia and northwestern Washignton, are even gray without the warmer brown patches that are found on the distal wing in X. finatimis.

Xestia is a large and diverse genus found throughout temperate, alpine, and arctic portions of the Northern Hemisphere. The genus is subdivided into three subgenera, Xestia, Megasema, and Pachnobia, by Lafontaine (1998). The genus is defined by a thumb-like ventral extension called the pollex which arises from the base of the clasper of the male valve. Xestia finatimis is placed in the subgenus Xestia.

The Northwest distribution of X. finatimis is similar to that of X. infimatis. It occurs across southern British Columbia, Washington, northern Idaho, and western Montana from the Pacific to the west slope of the Rocky Mountains. It is found throughout Oregon, including mountains in the Great Basin region of the southeast, but it has not been found in southern Idaho.

This species is only found in California outside the Northwest. The range extends to near the border with Mexico in the western part of the state.

This species appears to feed on various hardwoods such as serviceberry (Amelanchier spp.) in the Rosaceae and alders (Alnus spp.) in the Betulaceae.

Xestia finatimis flies in summer and early fall, usually slightly earlier in the year than X. infimatis. Northwest records are from late July to mid-September. It is nocturnal and comes to lights.