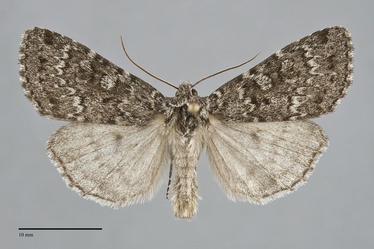 Xestia speciosa is a moderately large broad-winged noctuid species (FW length 19 - 21 mm) with a busy powdery pattern of pale-filled scalloped lines and spots with a reniform spot that is filled with gray centrally. It occurs in high elevation conifer forests in northern Washington and British Columbia in our region. The forewing ground color is slightly mottled powdery medium gray, usually without darker areas. The transverse lines are dark gray, double, with pale whitish gray filling. The antemedial line is zig-zagged and the inner component of the postmedial line is strongly scalloped. The pale subterminal line is nearly straight. It is preceded by a series of smudged black wedges that are variable in strength and number but usually present at least near the apex and opposite the cell. The orbicular and reniform spots are dark gray, often incomplete, and filled with light whitish gray peripherally and the ground color centrally. The dark filling of the reniform spot is extensive. A faint black bar connects the lower portions of these spots across the posterior cell. The claviform spot is small and indistinct. The hindwing is powdery pale gray with indistinct darker discal spot, scalloped postmedial line, and indistinct submarginal shade near the anal angle. The head and thorax are grizzled black and white. The male antenna is weakly biserrate.

Xestia speciosa can usually be identified by its powdery medium gray appearance without other colors such as brown, yellow, or green - unlike Aplectoides condita and Anaplectoides pressus, and extensive dark gray filling of the central reniform spot. Xestia mixta, a predominantly eastern North American subarctic species, is similar and occurs near the Alberta-British Columbia. This species is usually smaller and more crisply marked black and white than X. speciosa. The male antenna is bead-like, unlike the biserrate antenna of X. speciosa. The male and female genitalia are also different as discussed and shown in Lafontaine (1998). Xestia perquiritata, a more widely distributed species that flies with X. speciosa in most of our region, is also similar but has a crescentic reniform spot that is uniformly filled with light gray unlike that of X. speciosa. Xesta lupa, a smaller species that has only been found in extreme northwestern British Columbia but might be more widespread in the northern province, also has a reniform spot that lacks significant central gray and the black spots preceding its subterminal line are less distinct that those of X. speciosa, often fused into smudged dark spots that blend across the veins.

Populations of X. speciosa are arranged in a number of subspecies. Only X. s. apropitia occurs in the Pacific Northwest. It is larger than X. s. arctica, found to the north of our region, and has less well-defined maculation.

This species is unlikely to be confused with other species in most of our region but is similar to Xestia mixta which is found near the border with Alberta.

Xestia is a large and diverse genus found throughout temperate, alpine, and arctic portions of the Northern Hemisphere. The genus is subdivided into three subgenera, Xestia, Megasema, and Pachnobia, by Lafontaine (1998). The genus is defined by a thumb-like ventral extension called the pollex which arises from the base of the clasper of the male valve. Over half of the North American species are found in the Northwest. Xestia speciosa belongs to the subgenus Pachnobia.

This species is widely distributed in boreal spruce-fir forests, extending westward to high elevation subalpine forests in the Pacific Northwest.

Xestia speciosa has been collected in the mountains of southern British Columbia and in the Cascade Range in Washington. The southern limit of the distribution is near Yakima, Washington.

This species has a Holarctic distribution and occurs across most of the Northern Hemisphere from Scandinavia to Japan and Alaska to the west coast of Hudson Bay. In North America the range extends south to southern Colorado in the Rocky Mountains.

This species appears to be a generalist, feeding on hardwoods such as huckleberries (Vaccinium spp.) in the Ericaceae and birches (Betula spp.) in the Betulaceae, as well as herbaceous plants in families such as the Asteraceae.

The adults are on the wing from mid-June to late August in our region. It is nocturnal and comes to lights.